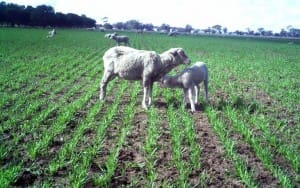 WA producers are being told the time is right to graze crops.

BROADACRE WA sheep producers with moisture-stressed crops and pastures are being urged to consider grazing crops to balance the overall profitability of their operation.

Department of Agriculture and Food development officer Jonathan England said during the next month there was a window of opportunity for producers to satisfy feed demand by grazing crops with little impact on yield, but with benefits to pasture production and quality.

“With the recent rains, pastures are primed for growth with established root systems.

“However, due to generally small leaf area, they are unlikely to achieve the same growth rates as crops,” Mr England said.

“Any chance of grazing deferment now, while growing conditions are good, will result in improved pasture accumulation for grazing in another couple of weeks.”

He said the increase in pasture biomass would translate to superior feed availability for the rest of the season and the potential for improved seed set, with carryover benefits for next year’s pastures.

Collaborative research, funded by the Grains Research and Development Corporation, has shown that crops can be grazed from the three to four leaf stage until the commencement of stem elongation and harvested later without significant yield penalties.

Mr England said advanced crops, which were tillering and initiating heads but that had not begun to elongate and were likely to flower in August, could be grazed now.

“To achieve a delay in flowering of about a week in crops approaching stem elongation, graze quickly to about five centimetres within a week with at least 30 dry sheep equivalents per hectare,” he said.

“Leaving some residual leaf area after grazing will assist with plant recovery and yield.”

Any crops that are further advanced than this, around booting, are probably best to become a fodder crop, with the chance that new tillers may still provide around 50 per cent of potential grain yield but with a more appropriate maturity date.

Grazing crops prior to elongation removes the leaf, which can reduce water losses through the leaves and reduce crop water use.

“Heavier grazing is likely to delay flowering but will not remove the developing head – providing elongation has not commenced,” Mr England said.

“Grazing past the start of elongation may cause the developing head to be removed, substantially impacting yield.”

The strategy of grazing younger plants will be less likely to impact yield and maturity but grazing pressure will need to be less (5-10 DSE/ha). Additional benefits may include spray grazing of any broadleaf weeds.

Mr England said there were growers who would need to defer grazing on pastures who could consider supplementary feeding in sacrificial paddocks or feedlots.

“However, feedlotting is not advised for lambing ewes, especially twin-bearing ewes, that have high energy requirements and increased risk of mismothering,” he said.

Mr England said growers who decided to graze their crops should follow some simple guidelines to follow.

“Use the pinch and twist test to make sure that sheep can’t easily pull plants out of the ground and that they are safe to graze,” he said.

“Ensure sheep are up-to-date with vaccinations and give them a good feed prior to introducing them to lush crops in association with an additional ad-lib mineral supplement.

“Low stocking rates over large areas would be less likely to have a significant yield impact, while higher rates are advised for shorter periods of a couple of days.  Above all, monitor your animals and crops regularly.”

More information is in the department’s latest Southern and Central Ag Tactics publications available at agric.wa.gov.au by searching for ‘AgTactics’