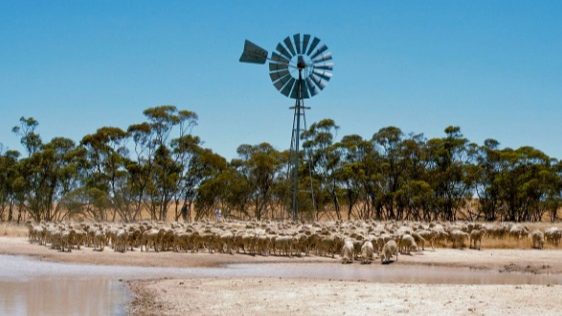 Improved seasonal and stock water conditions are underpinning the sheep outlook in WA.

THE flow of Western Australian sheep to the eastern states is expected to slow with improved seasonal and market conditions, with the state’s producers already in flock rebuild mode.

And despite recent interstate sale figures leading Meat & Livestock Australia to suggest the WA Merino flock had been “substantially liquidated” by recent west-to-east sales, most sheep being sold now are remaining in the state.

The Department of Primary Industries and Regional Development said the last time the WA breeding ewe flock was less than 7 million was in 1957-58 when the breeding ewe flock numbered 6.98 million. This was from a total flock of 15.7 million so breeding ewes made up around 44pc of the flock.

Lamb shipments east were up 75pc in past year

MLA market information manager Steve Bignell said it is evident that eastern demand for sheep as flock replacements during the early stages of the drought-breaking rain was insatiable. Following the widespread rain from March to June 2020, 816,000 sheep and lambs were transported from the west to east, averaging 204,000 head a month, well above the traditional average since 2009 of 27,459 sheep and lambs per month.

The number of lambs transported east also rose sharply prior to, and following, the drought-breaking rain around March 2020. And when the WA spring flush hit the market, lamb shipments east again experienced a sharp rise, Mr Bignell said.

“This was due to WA producers looking to capitalise on strong market conditions in the eastern states and make better returns on investment rather than selling to the historically softer WA market.”

Mr Bignell said WA’s flock, especially Merinos, is “significantly liquidated”, which will impact the live export trade and need successive strong seasons to support its rebuild. He said the big depletion in Merinos in Western Australia has come from a 10 percent reduction in Merino lambs year-on-year from 2.8 million in February 2020 to 2.6 million in February 2021. He said the number of Merino wethers was down 12pc year-on-year (516,000 to 452,000).

WA flock has not been ‘substantially liquidated’

He said in the last 12 months live export numbers and lamb processing numbers had been lower, he estimated that Western Australia was about 500,000-600,000 sheep “over-sold” for the past two years compared to figures three years ago.

“So I’m saying that our sheep flock is fragile, but nowhere to the extent that people are surmising.”

Mr Hubbard said without the eastern demand for ewes and lambs, WA would have been dire straits.

The number of lambs sold to the eastern states, is a concern, and the number of ewe lambs in the total could have been understated, but cannot be quantified, he said.

“The percentage of those (lambs) that are ewes, we can’t quantify, but I would say that a lot of them are crossbred lambs and a lot of Merino wether lambs have been going, but certainly we’ve sold quite large numbers of ewe lambs.”

Mr Hubbard said the eastern states’ demand has been a great support for WA sheep and lamb sales.

“Without the east, our market would have been a lot different to the one that we’ve experienced.”

Mr Hubbard said with the great start to the 2021 season in WA, 95pc of the store sheep and cattle being sold are staying in the state.

“We’ve gone from a selling mode to a buying mode.”

Mr Bignell also said the improved conditions in Western Australia were likely to impact producer intentions in the state.

“It is likely that the wet autumn and good outlook for winter will cease any flock liquidation in the state, stopping the flow of sheep to east that lead to 2 million head being trucked across the Nullarbor in 2020.

“The favourable conditions in WA will encourage producers to rebuild their flocks,” he said.

“A recent MLA benchmarking report found that mixed sheep and cropping farms in WA are the most profitable in the world, reinforcing the rebuild mentality in the state.”

“They’ve got feed, they’ve got crops, and there is also water in dams.”

He said the lift in WA sheep sales to the eastern states in March-June last year was driven by the demand by drought-breaking rains and producers sourcing replacements ‘far and wide’.

“The lift in turn-off to the east in September last year was due to higher lamb returns and restocker demand in the east.

“The key thing is that absolute numbers have fallen and it is obviously Merinos that are going into live export,” he said.

“So we are definitely expecting that the numbers going into live export will be down because the transport of stock east has reduced the number of sheep in WA.”