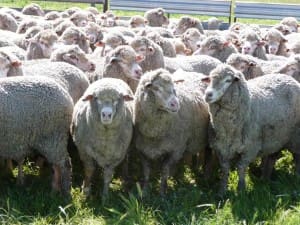 WESTERN Australia’s sheep producers could be in for their most challenging year for worm control in decade, following widespread summer rains in agricultural areas, Department of Agriculture and Food principal veterinary officer Brown Besier said today.

The department is urging a vigilant approach to worm control in sheep to manage elevated worm burdens.

“Traditional worm control programs will be less effective than usual on many properties, particularly where sheep were carrying significant worm burdens when summer pasture growth commenced.”

This was especially likely where drench resistance had reduced the effectiveness of drenches given in summer and autumn, as their pre-emptive effect on winter worm problems would be reduced, he said.

“Preventing unseasonal worm problems depends on keeping the worm egg counts of sheep as low as possible in autumn.

“If adult sheep did not receive the recommended drench in early autumn, this should be given now, unless worm counts show their worm burdens to be low.”

Dr Besier said it was particularly important that worm egg counts were low in ewes prior to lambing.

Producers are advised to check worm egg counts and if average mob counts are above about 100 eggs per gram, pre-lamb drenches should be given two weeks before lambing is due.

“The worm egg counts of weaners and other young stock should be checked at intervals of four to six weeks from now onwards.

“Once counts rise above about 300 eggs per gram, drenching should be considered, especially in mobs in light condition,” Dr Besier said.

In Barber’s Pole worm regions, there is a significant risk of sheep losses, as weather conditions have been ideal where there has been early pasture growth.

The high worm egg counts expected in sheep this year will provide ideal opportunities to test for drench resistance.

“The worm problems that usually result from early pasture growth are exacerbated by poor drench performance, but without a drench check, it’s difficult to know whether treatments will be effective,” he said.