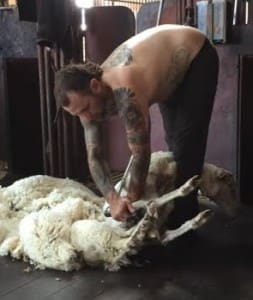 The attempt will take place in a four-stand woolshed at Yathroo, about 160km north of Perth. The 36-year-old New Zealand-based Guelfi needs to average over 58 an hour to break the record of 466 set by Australia-based New Zealand shearer Cartwright Terry in West Australia 13 years ago.

Terry will be among the biggest supporters in the shed and said he wouldn’t miss the record attempt.

“Hopefully he’ll get the result.”

Guelfi, originally from Kukerin, south east of Perth, but based for the last 15 years in Gisborne, NZ, has shown he has the capability, having shorn 461 of  the fine-wooled wrinklies as he and two others set a three-stand record near Dubbo, NSW, in April 2014.

But he has a big history in shearing records on both sides of the Tasman, dating back to 1998 when he shore a since-broken Merino lambs record of 467. He was at the time aged just 19, and remains the youngest shearer to have broken a World record.

He is also a current strongwool record holder, having shorn 713 lambs in a four-stand nine-hours record set in a woolshed near Turangi, south of Taupo, in December 2007.

It was after the 1998 record Guelfi resumed the global sheep-shearing trek, finally settling on Gisborne, the gateway to the east coast of the North Island.

“I loved it there, for the surfing and the shearing,” he said.

There would be no surfing today as he prepares for the big day with a mixture of shearing a few as his team do the final cut and remove about 200 from the target flock. There would also be massage, carbohydrate loading, swimming, yoga and relaxation.

A sample of 10 sheep will also have to be shorn before four World Sheep Shearing Records Society judges – Colin Gibson, from New Zealand, and Australian officials Bernie Walker, Ralph Blue and Mark Baldwin. The sheep in the sample will have to shear an average of at least 3.4kg of wool each, but Guelfi saw “no problem” with that requirement being met.

The record bid starts at 7am (11am NZ Time) and will have four two-hour runs, separated by half-hour breaks for morning and afternoon smoko and an hour for lunch.

Meanwhile, a nine-hour strongwool ewes record which was to have been attempted in New Zealand on Monday by Southland shearer Leon Samuels has been cancelled.