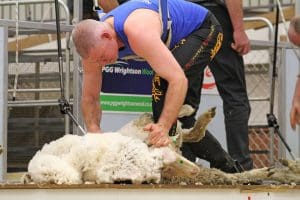 WESTERN Australian shearer Damien Boyle has won a seventh New Zealand Open Merino Shearing Championship title in eight years at the opening event of the 2017-2018 shearing sports season in Alexandra at the weekend.

Shearing on stand number 5 in Saturday night’s final in Molyneaux Stadium, against five others who have all represented New Zealand in trans-Tasman shearing tests, Boyle needed the best of the quality points to win.

The WA shearer was well-beaten on time by Invercargill shearer Troy Pyper, who was facing down the board from stand number 6, and just pipped by Alexandra vetereran Dion Morrell, on stand number 1.

Shearing in his trademark sling to support his back, Boyle, 39, had won the final six-times in a row from 2010-2015. Southland shearer Nathan Stratford restored the Kiwi pride with a popular victory last year, at the start of a season in which he went on to win a world teams title in front of his home crowd in Invercargill.

When all time and quality points were calculated last night, Pyper had to settle for second place and Stratford third. Colin O’Neill, of Alexandra, was fourth, Chris Vickers, of Palmerston, fifth, and Dion Morrell, of Alexandra, sixth.

Stratford, O’Neill and Morrell grabbed one back for their Kiwi fans when they won a trans-Tasman Merino test match against Boyle, Beau Guelfi and Callum O’Brien. 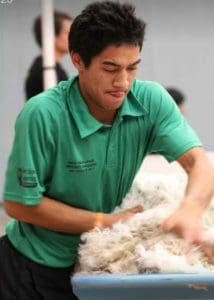 World champion wool handler Joel Henare, from Gisborne, NZ, started his new season with two wins on the way to a target to reach a career tally of 100 open final victories, now over 90 to his name.

Father-of-three Henare turns 26 later this month, but has spent almost half his life in open wool handling competition, fast zeroing-in on becoming only the second person to win 100 open-class titles.

Ranfurly shearer Vanni Stringer won the senior shearing final, in which Karauria put in another display of shearing sports versatility by adding a sixth-place cheque to that she won in the wool handling.

The senior wool handling title was won for a second time by Ebony Turipa, of Gore, and the junior title was taken by Linda Duncan, of Alexandra.

The championships attracted 126 entries, with 51 in the two shearing classes and 75 in the three wool handling classes.

The shearing sports season continues at the longwool 50th anniversary New Zealand Spring Shears in the South Canterbury town of Waimate next Friday and Saturday, clashing with the opening North Island event at the Poverty Bay A and P Show in Gisborne on Saturday.