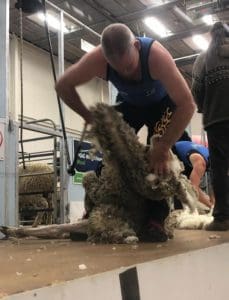 WA shearer Damien Boyle’s arm is a blur as he clears the neck wool on a Merino at Alexandra. Image – Kristy Boyle.

WESTERN Australian shearer Damien Boyle has made the best of a holiday with the family in New Zealand by winning the New Zealand Merino Shears Open shearing title in Alexandra – for the eighth time in 10 years. 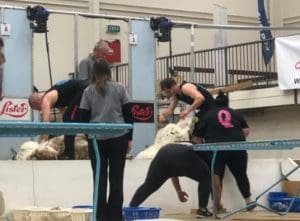 There to see Boyle’s latest wins were wife Kirsty, 13 year-old daughter Abby and eight year-old son Zac. Boyle said: “That made it extra special, to do it in front of the family.”

Boyle’s father Don said from Western Australia today that he “couldn’t be any more proud.”

“And then he’s won that one over there eight out of 10 times and got two seconds.” 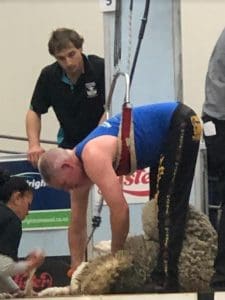 “ I saw him at Corrigin a few weeks ago, he shore really well there, and at the Perth Royal, the way he shore … especially in the trans-Tasman, he just picked his pen beautifully and he absolutely just blitzed the field,” he said.

Boyle put in some last-minute preparation 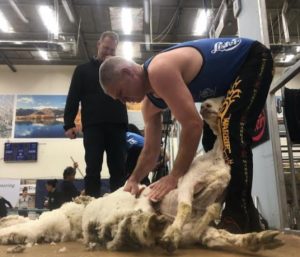 Despite the demands of holidaymaking in New Zealand, which included the inter-island ferry on the way south from the North Island and skiing at Queenstown to come, Boyle still managed to shear possibly more sheep in New Zealand in preparation for Alexandra than in any of his past ventures.

In the spirit of the competition he found his way out to Earnscleugh Station on Thursday and shore more than 50 Merinos for contractor Peter Lyons. He might not have needed them, for Boyle had crossed the Tasman earlier in the week after winning his 23rd Perth Royal Show open title in 24 years.

Last night in Alexandra, Stratford had to settle for third place as Canterbury-based Southland shearer Troy Pyper won a place in the New Zealand team for the 2019-2020 trans-Tasman series, opening with the first leg during the Australian national championships in Dubbo, NSW, at the end of next month.

Hometown hero Pagan Karauria, in her first competition since winning the world wool handling teams title in France in July, successfully defended the NZ Merino Shears Open Woolhandling title, claiming victory in the event for a fourth time. She showed her class throughout, as top qualifier from the heats and the semi-final. Runner-up was Amy Lee Ferguson, in her first finals placing since 3rd at Alexandra three years ago.

Both Karauria and Pyper secured places in the New Zealand wool handling team for the 2019-2020 home-and-away trans-Tasman series, the first tests of which will also be at the Australian national championships in Dubbo.

Shearing Magazine publisher and Hamilton-based Southlander Des Williams, who recently published the 100th edition of the magazine which first appeared in 1984, rarely misses the Merino championships, with about 24 since watching his first in 1992, but was as enthused as ever.

He sponsored a novice wool handling event which, he said, showed some promising signs, with seven of the 114 shearers and wool handlers which competed over the two days of the first of 59 shows on the Shearing Sports New Zealand calendar for the 2019-2020 season.

“There always is a lot of excitement here,” he said. “A lot of younger competitors who’ve only come into the industry in the last 12 months or so, and for some it’s their first show.”

Results from the New Zealand Merino Shears at Alexandra on Friday-Saturday, October 4-5, 2019: