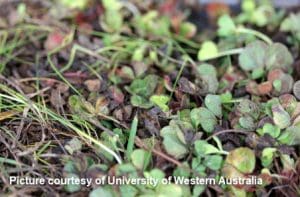 WESTERN Australian livestock producers are being surveyed to increase understanding of the spread of Red Leaf Sub Clover Syndrome across the state’s southern region.

Producers have expressed concern in recent months after observing the sub clover leaves turning red, following which the plants die.

This phenomenon has been reported in the Esperance region for a number of years; however, following the recent dry winter, producers have grown concerned that it has significantly spread.

To better understand the spread and extent of the syndrome – as well as provide researchers and extension providers with more information in order to identify short and long-term solutions – MLA and AWI have developed a survey to enable producers to share their experiences.

MLA and AWI are planning to bring together a cross-disciplinary group of researchers, pasture agronomists and extension experts to assist producers in how to best manage their pasture.

Whilst MLA and AWI over many years have invested in – and continue to invest in – the development of novel legumes such as Biserrula and Serradella, the organisations acknowledge that subclover is an important basis for any pasture system and without functioning legumes, pastures significantly lose productivity and cannot sustain current livestock production.

MLA general manager – producer consultation & adoption, Michael Crowley said feedback from producers on the issue would assist in understanding the spread of the problem to enable short and longer term strategies to be developed.

“We understand the level of concern amongst producers about the spread of Red Leaf Subclover Syndrome. If you are a producer who has experienced these problems we want to hear from you,” Mr Crowley said.

“This is a combined effort to collect more information on the syndrome and will be used to better inform a suitable research approach to identify management strategies,” Dr Littlejohn said.

Producers in southern Western Australia experiencing issues with their subclover pasture and willing to assist MLA and AWI should visit http://survey.mla.com.au/TakeSurvey.aspx?SurveyID=clover