RECENT Western Australian analysis of the profits inherent in minimising ewe mortality has underpinned the release of an innovative flock composition tool.

DPIRD said the importance of strategic stock management decisions is highlighted by economic modelling, commissioned by the department, which concluded ewes were a highly reliable determinant of future flock profitability.

“This finding illustrates how important it is to make the right selling and retaining decisions and use tools like the Sheep Flock Composition Calculator to develop profitable flock management strategies.”

Mr Young’s modelling reinforced that the ewe is the powerhouse of the sheep enterprise and maintaining the productive base of the sheep flock in the current market conditions is highly profitable.

Increased ewe mortality in the average WA flock reduces profitability by an average of $280 per ewe lost in Merino-Merino matings and $320 for Merino-Terminal Sire joinings, the analyst concluded.

“These results are based on current prices and the expectation that extra losses are likely to occur from the twin bearing ewes because these tend to be lower CS at lambing (unless scanned and differentially fed in late pregnancy).”

Mr Young concluded that there is little variation in value of the ewe lost between regions, time of lambing, flock structure or wool price. However, there is variation between dry, single and twin bearing ewes, and variation due to meat prices. Twin bearing ewes are $60/head more valuable than single bearing ewes and varying meat price up or down by 25 percent changes ewe value by about $55/head.

Mr Young said the cost of increasing ewe deaths is the equivalent of the benefit of increasing ewe survival and this represented in the amount that could be spent on a ewe to prevent mortality. Mr Young found that the value of an extra ewe is more sensitive to meat price than wool price (see Table 8).

“These results are consistent with the findings from the analysis on the value of extra lambs that showed the value of an extra lamb is much more sensitive to meat price than wool price,” he said. 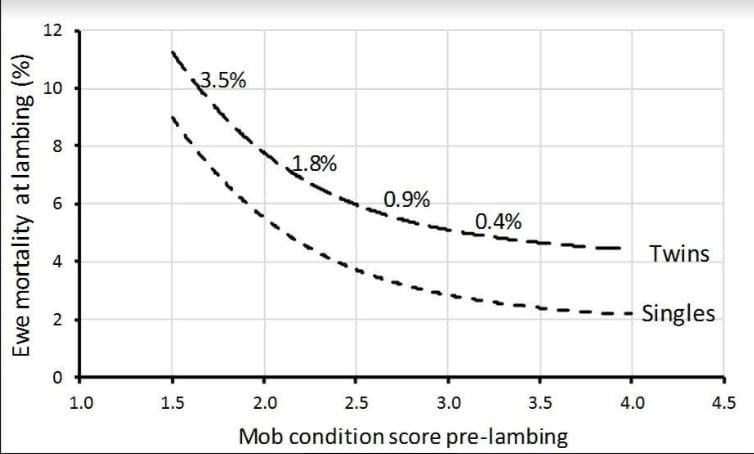 The Sheep Flock Composition Calculator predicts changes in flock structure over time, from which producers can determine the impact on future financial returns.

Ms Curnow said the calculator provided a clear picture of how selling or changing the number of breeding ewes could impact on future flock production and value.

“This new tool gives producers the opportunity to model and compare different scenarios, which will help give them more confidence in their final decision,” she said.

The calculator required users to input ewe and wether numbers, their ages at the start of the first year and expected sales, the ratio of merino ewes mated to merino rams and terminal sires and the weaning percentage.

It then estimated the number of ewes and wethers over the next six years, providing a summary line graph of stock numbers over time, yearly stock numbers by age and a commentary.

The tool also determined the impact of keeping wethers, changing the ratio of Merino ewes mated to Merino rams and terminal sires and changing weaning percentages on breeding flock numbers.

“Producers will be able to use the calculator to evaluate the impact of changes on the age structure of the breeding flock, the potential number of lambs at a given weaning percentage, the culling or classing percentage and the proportion of wethers retained.

“With this information in hand producers will have a better understanding of the short and longer term consequences of their decisions on breeding objectives, production strategies and finances,” Ms Curnow said.

The Sheep Flock Composition Calculator is available for free on the department’s website agric.wa.gov.au, as is the Value of the Ewe economic modelling.

Click here to read John Young’s ‘Analysis of the value of a ewe in the WA sheep industry’.

Click here to see details from Mr Young’s recent presentation on the value of a ewe.