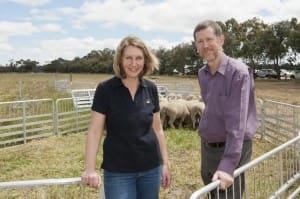 Speakers at the More Sheep forum held in Katanning, Kimbal Curtis and Lucy Anderton, of the Department of Agriculture and Food.

WA lamb marking rates have risen to their highest level in 10 years, a More Sheep forum was told at Katanning last week.

Department of Agriculture and Food research officer Kimbal Curtis told the forum that in each of the past four years the WA lamb marking rate has been higher than in any of the previous 10 years.

“This has led to a 10 per cent increase in average marking rates to about 88 per cent,” he said.

Rebuilding the flock will be challenging

However, despite the productivity improvements, Mr Curtis said the industry faced challenges in rebuilding the flock from its currently estimated 15 million head, as strong demand for stock resulted in attractive prices for producers.

“The flock is forecast to have declined in 2013/14 driven by strong turn-off with lamb slaughter up 25 per cent, sheep slaughter up 9 per cent and live exports up 4 per cent.

“Both the saleyard and over the hooks indicators for lamb and mutton have increased steeply this year,” he said.

Mr Curtis said the expected ongoing strong export demand for sheep and sheep meat suggested that the WA flock would struggle to expand in the near term, and that prices were more likely to rise.

Both the saleyard and over the hooks indicators for lamb and mutton have increased steeply during 2013/14. The lamb indicators are only slightly lower than the levels reported at the previous peak in July 2011. The mutton indicators have not yet achieved the levels seen in 2011, but are 70-80 per cent higher than where they were in early 2013, the forum was told.

Value of sheepmeat and live exports is high

The forum participants were told the value of Western Australian sheep and lamb meat exports in 2013/14 was $324 million, up 60 per cent on the previous year. The Middle East, China and the USA were the dominant markets.

Live sheep exports worth $160 million were largely split between three key markets – Kuwait, Qatar and Jordan. Western Australia supplied 88 per cent of all sheep exported out of Australia, the highest level for at least 10 years.

“The More Sheep initiative, along with important practical programs such as Lifetime Ewe and Bred Well Fed Well, are critical to improving understanding about how to increase lamb marking as well as economic performance of the sheep enterprise within the farming system,” he said.