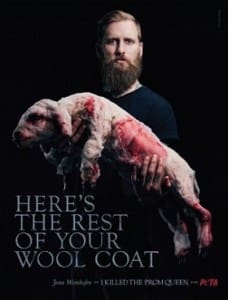 WAFarmers has had a defiant response from vegan rock guitarist and PETA anti-wool ambassador Jona Weinhofen to its crowdfunding campaign to teach him how to shear a real sheep.

Responding on Twitter to WAFarmers campaign to raise $4500 to send him to a shearing school, the Adelaide-born guitarist tweeted he would attend any school if the money was donated to charity.

But he also tweeted the money would be “better served” putting CCTV in all wool, dairy and beef farms and asked “how is teaching him to shear a sheep supposed to prevent the cruelty already occurring within the industry?”

“We’re sitting at about a quarter of our target.”

In other Twitter conversations, Mr Weinhofen continued to defend his role in a PETA-sponsored anti-wool and shearing video first released on April 2..

“Farmers and ex-shearers in your own state have already publicly spoken of their concerns for animal welfare within the industry.

“What I understand is the cruelty I witnessed on just 19 farms – how many others consider the same behaviour standard practice?” he said.

Australia’s state farming bodies this week took the lead in the industry backlash to PETA’s latest anti-wool industry video with the WAFarmers crowdfunding campaign to teach Mr Weinhofen how to shear a real sheep.

After shearers in Australia and America reacted on social media with images of real shorn lambs to counter the fake newborn lamb held by Weinhofen in the PETA video, Australia’s Federal Agriculture Minister Barnaby Joyce and then industry bodies including WoolProducers Australia, Australian Wool Innovation and the Shearing Contractors Association of Australia responded last week to shearer, media and wool grower pressure.

WAFarmers said Weinhofen is the most recent celebrity to pose for PETA in a misleading campaign that depicts shearing as a barbaric practice that is damaging to animals. The ‘injured’ lamb prop featured in the campaign is widely acknowledged as being made of foam and depicts a lamb too young to be shorn, WAFarmers said.

PETA preying on those with no knowledge of shearing

WAFarmers president Dale Park said PETA’s fake lamb is only the first of many misrepresentations in the unethical campaign.

“No one that I know would shear a lamb that size – it looks a day old – and certainly they wouldn’t tolerate such a low standard of shearing,” Mr Park said.

“The PETA campaign preys on people that have no knowledge of shearing practices.

“Shearers are trained in best practice technique and any shearer that did that to a sheep would be out of a job,” he said.

Mr Park said the agricultural industry is standing together against inaccurate campaigns.

“We are not ashamed of our industry.

“We have very high animal welfare standards and are constantly striving to improve them.”

“Education and information are vital to ensure inaccuracies about shearing practices are not perpetuated.”

It costs $4500 to send a person with no prior experience to a shearing school.

WAFarmers said if it raised enough money, it would invite Weinhofen to attend one of these schools so he is better informed about the practices he is commenting on. If WAFarmers exceeds its goal of $4500 it would like to extend the invitation to the staff at PETA, including its chief executive officer  and the marketing department, to clarify any misconceptions they might have.

Crowdfunding campaign is an attempt to avoid real issue

However, PETA Australia’s campaign co-ordinator Claire Fryer said the crowdfunding campaign is “simply another attempt to draw attention away from the very real issue here – the abuse of sheep by the wool industry.”

“If wool producers care about their business, they should invest money in items which can address this issue, such as in shed cameras and compulsory drug testing for shearers — rather than spend their time denying an issue which they have already acknowledged exists.

“Everyone keeps forgetting that there is a video on peta.org.au that documents shearing leading to severe cuts on sheep’s bodies,” she said.

“Large swathes of many sheep’s skin were cut or ripped off by the shears.

“Workers didn’t give sheep any painkillers before using needles to sew up their flesh to try to close gaping, bloody wounds caused by shearing while the sheep writhed and kicked out in pain,” she said.

“It’s disingenuous for the industry to say that this doesn’t happen when there is documented evidence of it.”

WAFarmes is urging anyone who wants to support the crowd-funding campaign to visit https://www.indiegogo.com/projects/send-jona-weinhofen-to-shearing-school