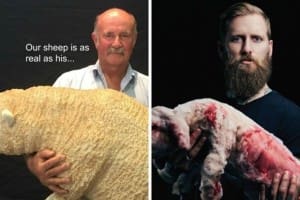 The campaign is more than two thirds of the way to the target of A$4500 to send the Adelaide-born vegan guitarist to shearing school.

In six days, the WA Farmers crowdfunding campaign to fund Mr Weinhofen’s attendance at a shearing school has raised just over $3000.

However, there is still internal Australian industry wool industry opposition to the WA Farmers initiative; with some bodies, including AWI, disagreeing on whether PETA should be engaged on wool or shearing issues.

WA Farmers president Dale Park said there has been communication with Mr Weinhofen and there was still some negotiating to do.

“He said he was prepared to go to shearing school but then there were a couple conditions – that he had to be flown out and then he wanted compensation for time lost that he would have been earning money.

“That’s about as far as we’ve gone and we won’t be doing any of that,” Mr Park said.

When we get our money, we will then go back to him and say, rightyo, we’re on, come on what are you to do.

“I really doubt that he will front but anyway we will cross that bridge when we get to it.

The crowdfunding campaign on https://www.indiegogo.com/projects/send-jona-weinhofen-to-shearing-school began after Mr Weinhofen featured in a PETA video and social media campaign highlighting footage of shearer cruelty and mulesing.

“Not that that they knew what was going on and that was obvious from the letter they sent us.

“Producers are sick of AWI and probably WoolProducers as well, just rolling over at whatever PETA says,” he said.

“And really the conversation that we had with both WoolProducers and AWI (last weekend) was “oh well, we should all calm down and just let it calm down, and nothing was public at that stage.”

Half an hour to determine shearing school cost

Mr Park said it took about half an hour to determine that attendance at an AWI shearing school would cost about $4500.

“Then suddenly we had phone calls and letters, and all sorts of things from people – obviously orchestrated by AWI – but I don’t understand.

“They didn’t know what we were doing – they (AWI) had this strange idea that we were asking PETA to run shearing schools,” he said.

“I think it is about time we actually showed that we are proud of our industry,” he said.

“We’ve got nothing to hide and that’s one of the things we will discuss assuming this fellow doesn’t turn up, which we think he won’t.

“But we should be showing people all about the shearing industry, how it is,” Mr Park said.

“I think we should be out there, up front showing that we’ve got nothing to hide and we are doing our best to get an industry which everybody will be proud of – and we think we’ve got one of those.”

AWI would rather sell wool than talk about PETA

AWI media manager Marius Cuming said AWI has responded to WA Farmers about its crowdfunding campaign in a letter, but suggested Sheep Central would have to seek it from WA Farmers.

Sheep Central believes AWI has the view that the best way to combat PETA and solidify with consumers the Australian woolgrowers’ social license to operate is to sell wool.

“AWI would rather sell wool than talk about PETA,” Mr Cuming said.

“The Fibre of Football (campaign) is aimed at re-connecting the Australian public with the great work done by woolgrowers around Australia,” the campaign co-creator said.