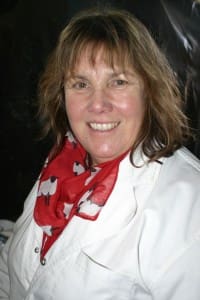 In the lead-up to the SSAA National Shearing and Wool Handling Championships on September 26 at Hamilton in Victoria, Ms Brooker-Jones said many wool growers didn’t realise the depth of what Australian Wool Innovation does, especially in shearer and wool handler training.

“I opened up my WoolPoll thing last night and sent my vote through, I read all the stuff in Beyond The Bale, so I know what has been going on during the year.

“From our point of view from Sports Shear Australia, I would encourage all woolgrowers to vote 2.5pc,” she said.

“They forget how important shearers and wool handlers are to the industry.”

Every farmer who has paid wool levies of $100 or more over the past three years is eligible to vote on one of five WoolPoll 2015 options – 3 percent, 2.5pc, 2pc, 1pc and 0pc. AWI is seeking continuation of the current 2pc levy, although some grower groups had sought a 1.5pc option before the poll opened.

The WoolPoll 2015 result will determine funding of wool research, development and marketing activities by Australian Wool Innovation (AWI) over the next three years. A Deloitte review of AWI’s performance reported that the company invested $2.1 million in shearer and wool handler training from 2012-2013, representing a return of $2.60 on every dollar invested. Now, 60 percent of trained shearers report better productivity and 79pc improved shearing quality.

AWI is funding the attendance of extra shearers and wool handlers at the national championships to attend to compete in ‘development’ classes, following a mentoring and training workshop on Friday September 25.

The developing shearers and wool handlers – in the novice, intermediate and senior classes — will be mentored by Australian team members at the workshops and at the national titles.

Sport Shear Australia, with the Hamilton Pastoral and Agricultural Society, is conducting the SSAA National Shearing and Wool Handling Championships at the Hamilton P & A Showgrounds. The SSAA championships were last held in Hamilton in 1996, the second year they were ever held.

Ms Brooker Jones said six states are sending their highest ranking shearers and wool handlers to compete for a place in the Australian team. Most states will also send selected novice, intermediate and senior wool handlers and shearers to experience the excitement of a national event, and give them the opportunity to be trained and mentored by the Australian team, along with Trainers from RIST, Shearing Contractors Association (SCAA) and AWI.

The top three shearers and three wool handlers from Victoria, New South Wales, South Australia, Queensland, Tasmania and Western Australia have won their places in the state teams by competing in events across regional Australia, mostly at rural country shows.

Current Australian team will be at Hamilton 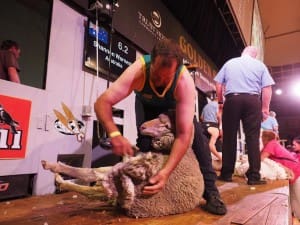 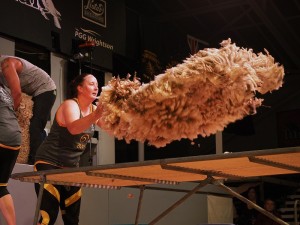 Wool handlers Sarah Moran, from Ararat in Victoria, (twice Australian champion and World Team 2014) along with Tara Smith from SA will compete after their Trans Tasman victory in New Zealand earlier this year.

Ms Brooker-Jones said an integral feature of the national championships will be the Trans-Tasman Test. Shearing Sports New Zealand has selected its top machine and blade shearers and wool handlers to compete.

Sport Shear Australia and the State Affiliates have instigated shearing and wool handling competitions since 1993. They are a part of Golden Shears World Council, who facilitates World Championships every 3 years.

Ms Brooker-Jones said the competitions encourage all levels of shearers and wool handlers to aspire to furthering the industry-based skills, which are required and recognised on a daily basis as part of their employment in the wool industry.