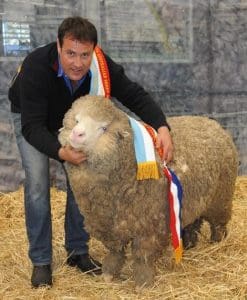 A VICTORIAN Merino ewe on her first show outing has beaten all comers for the title of supreme breed exhibit at the 2016 Australian Sheep and Wool Show at the weekend.

The Rokewood-based Wurrook Merino Stud’s all-conquering three-year-old ewe – the champion fine wool ewe at the show — has given the stud its second consecutive supreme Merino exhibit at the show in Bendigo.

“I thought she was a good ewe – I wasn’t surprised that she did well, but I wasn’t sure she would win the whole thing,” stud principal Paul Walton said.

The grand champion Merino ram at the 2016 show was paraded by Conrayn stud from Berridale, New South Wales.

Mr Walton said his supreme ewe was by a Merryville ram bought at the Hamilton Sheepvention sale, called Hamilton Giant.

“The dam was out of a Monarch family ewe, which is our bulkier bolder wool type family.”

Mr Walton said his sheep don’t go to many shows, but he considered the Bendigo event to be “the Olympics” on the show circuit.

“We try to show full wool sheep, we don’t show many short wool sheep, and it is the first show of this winter season.”

The stud had won supreme Merino exhibit four times at its last six shows – each time with different sheep – including at Bendigo in 2015, Dubbo, Canberra in the autumn and at Bendigo this year. The other shows contested were Ballarat and Hamilton.

“Six good shows and we won it with four different sheep,” he said.

Mr Walton said it was the first time the stud had recorded consecutive supreme wins at Bendigo, but had three consecutive wins at the Canberra show a few years ago. Wurrook’s 2015 supreme sheep at Bendigo last year was a superfine ram.

The 2016 supreme ewe will probably be taken to the Hamilton Sheepvention show next month and then “shorn out to be a proper sheep again,” he said.

ASWS Merino judge Michael Collins said the Wurrook ewe had magnificent fine wool, very even all over and down underneath.

“There was an enormous quantity of that wool for a fine wool sheep.

He said the ewe was very big for her micron type and very structurally correct. 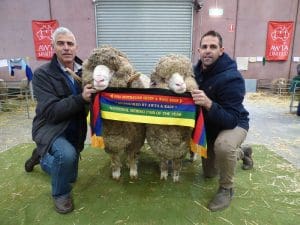 The prestigious National Pairs winner at the Bendigo show this year was the Western Australian entry from the Navanvale Merino Stud entry at Williams.

Navanvale stud co-principal Mitchell Hogg said it was the first National Pairs win for the stud after being finalists last year, and in 2014, when the ram fell sick and the WA pair didn’t come over for the judging in Victoria.

Mr Hogg said the win this year was a “huge thrill.”

“I’ve always wanted to do it so it is nice to finally be able to do it.”

He said the ram and ewe’s wool types matched better this year. The two-year-old 21.9 micron ram had previously won supreme Merino exhibit at the Williams Gateway Expo and was reserve grand champion ram at the Wagin Woolarama. The ram’s sire was the champion March shorn Merino ram at Bendigo in 2014.

The ET-bred Navanvale ewe was sired by Roseville Park 46 and out of a leading ET ewe. The ewe was grand champion Merino ewe at the Williams expo and reserve grand champion ewe at Wagin.

At Bendigo this year, the Navanvale ewe and ram won their respective medium wool August-shorn classes.

The ram will now be taken to the Rabaobank Katanning Sheep Show and Sale in August to be shown and sold.

“The ewe will stay here and we will put her into an ET program.”

“They were a very productive ewe and ram carrying white wool very well down into the points and underneath.

“And they were structurally very, very good sheep,” he said.

“They were both very large-framed sheep with great constitutions.”

“Their evenness, quality and quantity as a pair and their structure made them a clear winner – it was unanimous.”

The other finalists in the National Pairs judging including first-time participants, the Nareeb Nareeb stud from Glenthompson representing Victoria. The other finalists were the Trefusis stud from Ross in Tasmania, South Australia’s entrant from the Greenfields stud at Booborowie, the Nerstane stud from Walcha in New South Wales and the Victoria Downs stud near Morven in Queensland. 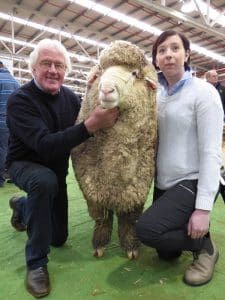 The champion Victorian-bred Merino ram of the show was shown by the Rock-Bank stud of Victoria Valley.