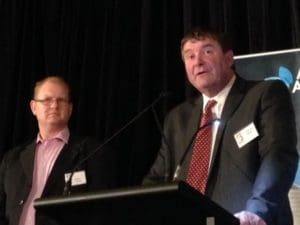 SHEEP traceability in Victoria has been highlighted as poor and an exotic disease outbreak risk, in a presentation by the state’s Chief Veterinary Officer Dr Charles Milne at the BestWool/BestLamb Conference in Bendigo this week.

“Within 24 hours we were able to trace every premises that those animals had been on — there were over 600 of them – and we knew the disease status of every one of those farms.

“At the same time, same day, funnily enough we started doing the Sheepcatcher II exercise to test how effective our sheep tracing is in Australia,” he said.

“Victoria was allocated 14 sheep, not 300, 14 sheep — we estimate it is going to take us over 13 days to trace those 14 sheep and we still won’t have the level of confidence that we have with those 300 cattle after 24 hours.

“That is a very real, current example.”

Dr Milne said a recent World Organisation for Animal Health (OIE) report on the Performance of Veterinary Services in Australia found Australia’s mob-based sheep traceability system was not robust and needed to be strengthened. Chemical residues and animal welfare infringements were also good reasons why livestock needed to be traced back to the farm of origin with confidence.

Property traceback is a weakness

After outlining his experiences with Foot and Mouth Disease outbreaks in the United Kingdom Dr Milne said Victoria was lucky with its geography, had a fantastic traceability system for cattle, but did not have a good database of all the properties with livestock kept in Victoria.

Dr Milnes said the UK has about 2.5 times the number of livestock in Victoria with 220 government veterinarians, whereas Victoria only had 26 veterinarians.

“So there is an issue of scale for us here in Victoria.”

At one stage in the 2011 FMD outbreak when 520,000 sheep and 5000 cattle were slaughtered, Dr Milne said it took three weeks to trace 20 groups of sheep that came into a Scottish market despite the country’s “reasonably strong” mob-based identification system.

“It took us three whole weeks to trace 20 groups of animals at a time when they were potentially seeding disease.”

Dr Milne said FMD clinical symptoms, unlike in cattle, were not picked up very easily in sheep.

“So it’s quite possible that if it first developed in sheep that we would have widespread dissemination of disease before we even knew we had a problem.”

UK farmers are more compliant with livestock regulations because they risk cuts in their government subsidies, which can be from $25,000 for small farmers up to more than $1 million annually for large operations, he said.

“So there is an incentive to comply and by and large, people do, but the system was still slow and I would argue that the system here in Victoria is as slow, if not slower.”

Dr Milne said a national stock movement standstill slowed down FMD spread in the UK. It would work here, but be painful and there were huge consequences for industry if livestock were locked up.

“We can’t enforce it and we can’t watch everybody all the time – if you want to move animals around the state under the radar, well it is your industry you are putting at risk.”

International markets will take a long time to open to FMD-affected countries and the risk to Australia from market closure is huge, he said.

“It will be years, it will not be a question of a month or two.”

“What is happening in the dairy industry at the moment will pale into insignificance compared to the price impact of market closure.”

Illegal swill feeding of pigs is the biggest risk for an FMD outbreak in Australia because imported meat products could contain the virus, but people could carry the virus on clothes and it would be easy to deliberately introduce the disease. Farmers played an important role in critical early detection, Dr Milne said.

“Just today (Tuesday) I got negative results, you will be pleased to hear, from a farmer who had reported a case of FMD.

“We like to see the calls, if any doubt call, because I would far rather have too many and rule them out than miss the one that is the start of the outbreak.”

Why should Victoria go it alone on electronic sheep identification?

Victoria’s Minister for Agriculture Jaala Pulford has been quoted as saying mandatory electronic tagging of sheep in Victoria was “probably an inevitable move” and when asked why would Victoria ‘go it alone’, Dr Milne said: “I suppose why does anyone do the right thing?” He understood Victoria introduced EID tagging of cattle and other states followed.

“My own view is we need to protect our producers and protect our markets and if that means we need to go ahead of other parts of the country – this is my personal view – whether it’s traceability or disease control or biosecurity, then we need to put in place the systems that are required.”

Dr Milne would prefer such changes be made nationally, but said there needs to be a “very mature debate”.

“Should we always go at the pace of the slowest – I’m not a great proponent of that.

“Why do we always have to wait for the big thing to go wrong until we actually take some action, would it be better that we were proactive and put in place mitigation of risks before we got an event we all regretted.”

When asked what the Victorian Government was waiting for before moving towards mandatory electronic identification of sheep and goats in Victoria, Dr Milne said it was Ms Pulford’s decision to make.

“We’ve got to have engagement with industry, because it is very difficult to introduce something like this on your own, we need to work with industry and take industry with us.

“We are waiting for the Minister to give the go-ahead – it’s her decision,” he said.

“When she decides one way of the other, then we will go.”