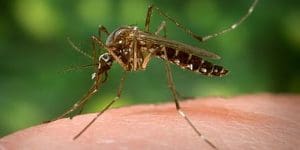 A female Aedes aegypti mosquito seeking out a penetrable site on the skin of its host. Image – James Gathany, CDC.

VICTORIANS have been reminded to protect themselves from mosquito bites after two deaths were connected with the Japanese Encephalitis Virus.

It was confirmed last week that a man aged in his 60s from northern Victoria died from JEV in late February and NSW Health said a man in his 70s from Griffith who died last month had the virus.

JEV is a mosquito-borne virus that can cause encephalitis in around one percent of cases who become infected. Most people who contract JEV will have no or very mild symptoms and fully recover but anyone who develops a sudden onset of fever, headache, vomiting as well as seizures or disorientation should seek urgent medical attention.

As of 8 March 2022, there have been seven confirmed cases of JEV in Victorian residents, including the one death.

A Japanese encephalitis vaccine is available and is recommended for people who work with or around pigs, including transport workers or vets who visit pig farms and those who cull or hunt pigs.

A Victorian Department of Health spokesperson strongly advised people take steps to limit their exposure to mosquitoes and avoid mosquito habitats such as stagnant water.

Victoria’s deputy Chief Health Officer Deborah Friedman said mosquitoes are still active at this time of year and are capable of transmitting a range of diseases, including Japanese Encephalitis virus and the more common Ross River virus.

Associate Professor Friedman said people can take simple steps to avoid bites and protect themselves and their family against mosquito-borne diseases.

“Mosquitoes can be active throughout the day, but the peak period is often around the late afternoon and into the evening as well as around dawn and dusk.

“People should wear long, loose fitting clothes and use repellents containing picaridin or DEET on exposed skin,” she said.

“Mosquito numbers can be reduced by getting rid of stagnant water around the home or campsites.”

Other handy hints are ensuring that insect screens fitted to doors and windows around the home or in caravans are in good condition, or insect flaps on tents are intact and closed.

Mosquito numbers are high in many parts of northern Victoria. People with increased exposure to mosquitoes may be at a higher risk of infection, particularly people working or living on pig farms, or working or spending time outdoors.

Children aged under five years and older people who become infected with JEV are at a higher risk of developing more severe illness, such as encephalitis.

A range of information relating to protecting against mosquito bites is available on the Beat the Bite campaign page on the Better Health Channel. For ways to beat the bite, visit https://www.betterhealth.vic.gov.au/campaigns/beat-the-bite