VICTORIAN sheep producers are being advised to animals affected by mouth and hoof lesions as flocks battle severe outbreaks of scabby mouth due to favourable Spring conditions.

Scabby mouth, or orf, is a condition caused by a virus that usually affects sheep around their mouths, but can, in the right conditions, seriously affect the hooves of unvaccinated lambs and sheep.

Bendigo sheep veterinarian Tristan Jubb said he is seeing mobs of young sheep, this year’s and last year’s lambs, with 3-30 percent of animals in a flock affected with lameness due to scabby mouth, many with fly-struck hooves.

“Every good Spring brings with it it’s own set of problems.”

Dr Jubb said he is seeing sheep with painful proliferative bleeding lesions around the front of the coronary band and on the back of pasterns, often with swelling up the leg, sometimes with multiple hooves and legs affected.

“Big ugly black bleeding lump on the backs of pasterns are common,” he said.

Dr Jubb said he is seeing the condition in merino, crossbred and shedding sheep flocks across northern and central Victoria, but there have been reports in other regions, around Ballarat and Hamilton, and in Western Australia. 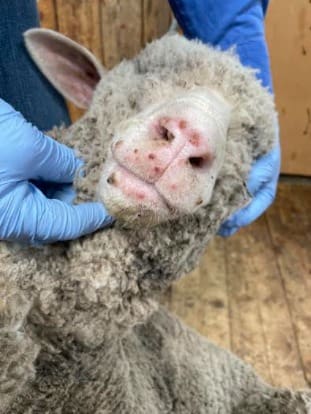 A sheep with scabby mouth lesions on the face. Image – Tristan Jubb.

“It’s really quite scary for sheep producers who find it in their young sheep.

“It’s been frightening for producers who have never seen it before.”

Dr Jubb said scabby mouth on hooves is usually complicated with a secondary bacterial infection, and is sometimes known as strawberry footrot.

“It is nasty, but is not footrot.

“These are serious outbreaks, sheep will die if they don’t get onto them.”

He said many young sheep are not vaccinated for scabby mouth.

“You won’t see it in flocks vaccinated with Scabigard at lamb marking.”

Scabigard vaccination of lambs does not prevent all scabby mouth outbreaks, but it markedly reduces any lesions which recover quickly, he said.

He has suggested affected sheep have their hooves bathed in a zinc sulphate solution and if fly struck, a fly oil product containing Ivermectin or Extinosad can be added. This would make the lameness disappear in a couple of days and lesions are usually gone after 2-3 weeks, he said. 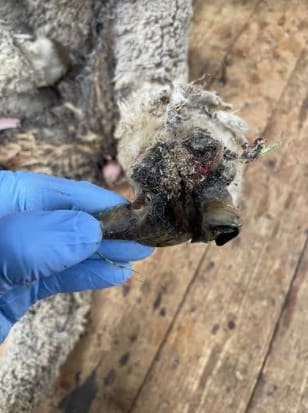 Dr Jubb said there can be many causes of different causes of lameness in sheep, including some exotic ones, so he advised producers noticing anything out of the ordinary to get a veterinary inspection done.

“It is always advisable to get an unusual case checked out by a vet just to be sure and to get some samples for the lab.

“Bluetongue can look like this in sheep and their is another one that is spreading through the UK, Ireland and Europe at the moment called contagious ovine digital dermatitis, the first cousin of the disease in cattle,” he said.

“If it’s unusual it’s always a good idea to get it checked out.”

“One of the worries is that all these hoof problems can get complicated by secondary bacterial infections so they all look the same, and that’s always in the back of a vet’s mind.”

Dr Jubb said some sheep affected by scabby mouth can develop cellulitis where the infection travels up the leg and might need antibiotics.

“It is really important to wear disposable gloves and wash hands if handling these sheep so as not to get infected oneself.”