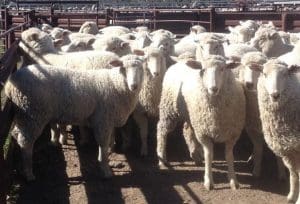 Last Friday’s sale was supplied by the clients of two agents with 8090 lambs and attracted 22 agents, producer and agent bidders. All lambs were contracted to Victorian processors.

The top price was $151.90, or 620c/kg cwt including skin value, for 1000 April-May drop Poll Dorset new season lambs from the Bertangles Partnership at Hay. The lambs consigned via Hay Plains Livestock’s Ed Lilburne were estimated to weigh 24.5kg cwt on delivery on August 29 within a range of 18-32kg cwt.

A 1000 mixed sex March-April White Dorper lambs from AJ & HA Mclean Greenvale, Booligal via Hay — estimated-weigh 21.6kg cwt at delivery on September 1 within a range of 18-25kg – that sold for $129.60, or 600c/kg cwt including skin value, through Hay Plains Livestock.

Other 2015 drop Merino lambs from Louth, Collie and Dubbo in New South Wales, sold from 500-530c/kg in post-sale negotiations, exclusive of skin value (skins-be tendered post slaughter). These lambs are to be delivered at 18-32kg cwt (most 20-24kg), between mid-August and mid-September. All lambs were sold to Victorian processors, with the lambs from Louth having an additional freight component of about 40 cents.

Mr Lilburne said the online forward contract option helped his client know where he was going with lamb marketing.

“Traditionally, when you head into spring the market comes off and we allowed for that in the sale.

“If those lambs were the same lambs in a month and we sent them today you will only get 630-650c/kg, but 620c/kg for the second cross lambs on farm with not a lot of joy in the skin job at the moment…” he said.

“We just want to know where we are heading, we’ve got plenty more behind them, so it’s a start.

Mr Lilburne said he had two other producers, including a SAMM breeder, keen to participate in the next sale on August 23 at 12pm, catering for forward contract or spot market options, and prime or store lambs.

“The beauty of it is we know where we are heading, lambs are going to trucked all over the nation and it’s playing ball on our terms a bit.”

The selling agent for the Merino lambs, Greg Seiler of Landmark Bourke, said he was pleased to be able to utilise the new concept, letting his clients come to the market and secure a price forward.

Composite ewes and lambs to $268 on AuctionsPlus

First cross ewes with lambs made from $196 up to $230 for 220 5-7 year-old mid-October shorn ewes at Violet Town in Victoria. The ewes weighed 65kg lwt, were mostly score 3, and had 290 3-4 month-old Poll Dorset cross lambs with an average liveweight of 30kg. A buyer also paid $227 for 250 five-year-old mid-August shorn ewes with 140 percent 2-9 week-old Poll Dorset lambs averaging 19kg lwt at Strathmerton in northern Victoria.

A line of 261 2-7 year-old mid-December shorn composite ewes with 398 4-9 week-old composite lambs at Strathkellar in Victoria sold for $268. The ewes weighed 69.1kg cwt and were mostly score 3.

Grown Merino wethers averaged $118 and made from $70 up to $160.50 for 446 three year old mid-August shorn Merryville blood wethers at Goulburn, NSW, weighing 18.7-19kg cwt and mostly score 2. They sold to a local buyer after strong interstate competition.

The store lamb market this week was topped by a line of 490 mixed sex unshorn March-April drop Border Leicester/Dohne lambs from Goodooga, NSW, that weighed 17.7kg cwt and were mostly score 3, that sold for $140.50, likely with future-breeder value factored in.

The ESDI for mutton added 1 cent to rise 9 cents for the week, closing on 395c/kg.

The NLRS said new season lambs provided most of the increased lamb yarding, with 4100 offered. Quality was good, particularly in the new season lines, and the heavy older grades were also well-presented.

Mainly trade lambs were penned, with fewer heavy weights. The lighter grades were limited and all the buyers operated in an easier market.

The NLRS said lamb quality was very mixed, with well-finished and plainer lambs offered. Most were heavy lambs. There were 2200 new season lambs penned and quality was fair. The usual buyers competed in a fairly steady market.

Most of the sheep were Merinos and quality was mixed. Prices lifted, with Merino ewes selling from $94-$130. Crossbred ewes made $75-$135. Heavy Dorper ewes averaged $107.