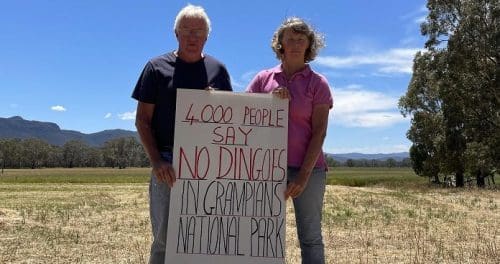 VICTORIAN farmers opposing the proposed introduction of dingoes into the state have organised a public meeting in Dunkeld next month to raise support.

The Crawford family’s first petition signed by about 4300 people successfully opposed proposals to reintroduce dingoes in the Grampians National Park as part of the Greater Gariwerd Landscape Management Plan.

In January this year, the family in Victoria Valley launched a second petition on Change.org opposing the re-introduction of dingoes across Victoria.

“We have about 650 signatures combined online and paper so far and we’ve recently sent it to livestock agents around Victoria and to keep the momentum going,” Mrs Crawford said.

“The purpose of the meeting is to update the local community, farmers, stock agents, businesses affected by these crazy Recommendations 8 and 28 in the Inquiry Report.

“We are encouraging people to bring graphic placards/signs and to do a group photo for press purposes.”

The Crawfords have distributed their second petition throughout south-west Victoria, including at rural stores in Heywood, Penshurst, Cavendish, Dunkeld and Hamilton. The assistance of livestock agents has also been enlisted.

“We are trying to get it (the petition) in every saleyard around Victoria,” Mrs Crawford said.

Sheep producers believe dingoes would cause devastation to the state’s million-dollar livestock and wool industry, threaten smaller native animals and be a threat to tourists that visit parks. Supporters for reintroducing dingoes believe they can assist in feral cat and fox control, help manage kangaroo numbers and they support landowners using non-lethal means to manage dingoes and wild dogs.

Shire of Southern Grampians councillors who in February passed a motion to write to Victoria Premier Daniel Andrews and his ministers opposing the inquiry recommendations have also been invited to the public meeting. Mrs Crawford said at least three councillors have already indicated they will attend, along with Western Victoria Liberal MLC Bev McArthur.

“We aim to get media attention and put pressure on the Victorian Government to reject these two recommendations and also, there is a State election later in the year.”

Mrs Crawford said it is not only sheep producers who are concerned about the dingo proposals.

“It is all livestock producers (beef, dairy, cattle, prime lambs) and wool growers, hobby farmers etc., and tourism operators in regard to the safety issue for camping and bushwalking.”