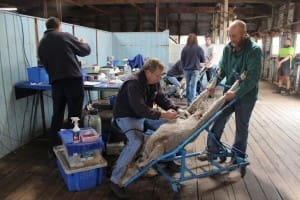 Victoria’s Elders Balmoral Sire Evaluation Trial will lead the nation in a new Merino Ewe Lifetime Productivity Project that aims to address the lack of sufficient whole-of-lifetime data for fleece and reproduction traits.

AWI said the trial will generate 3800 ewe progeny from 120 sires over four sites around Australia, evaluating these up to seven years of age. The ewe progeny will be joined four to five times and assessed for a comprehensive array of fleece, body, and reproduction traits.

The Lifetime Productivity Project addresses a weakness of current Merino genetic improvement systems: a lack of sufficient whole of lifetime data across both fleece and reproduction traits, AWI said.

The partnership project between AWI and Australian Merino Sire Evaluation Association (AMSEA), is expected to be a major stimulus to performance recording as assesses a significant number of animals throughout their productive lifespan.

AWI said the first sire evaluation site identified for the project is at Harrow in Victoria with others to be announced. To ensure inclusivity, the 120 sires entered across the entire project will be drawn from diverse breeding philosophies and from a range of Merino types. All progeny will be DNA pedigreed. 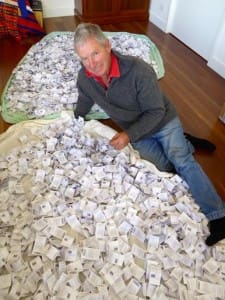 “We are all getting pushed to toward selling our rams younger and younger, and we haven’t got time to get the extra measurements.”

“We did once and now we sell them onto other people.

“But I don’t think there is any doubt that with younger and younger measurements, and the focus on growth rates, I’m sure we are probably losing some of that longevity I used to have.”

Mr Silcock said the longevity has never been able to be appreciated or measured before. He believed that perhaps sheep that were “great starters but early finishers” have been promoted above those that were slower starting but had greater longevity. He was looking forward to identifying sheep that matured early but also had longevity and fertility.

The Balmoral Sire Evaluation site ran the 1999 drop wethers for an additional two years, in an attempt to demonstrate the way various genetics perform differently over time, he said.

“With AWI’s recent commitment of funding, the Balmoral site is now able to run the Ewe Lifetime Productivity Trial and we look forward to evaluating lifetime fertility and performance.

“We have just joined 2160 ewes at Tuloona near Harrow, to 24 diverse sires from around Australia. Monitoring the female progeny and their productivity through their breeding life is going to be fascinating.

Mr Silcock said general manager of research at AWI, Dr Paul Swan, will provide an insight into this exciting trial at the Elders Balmoral Sire Evaluation Field Day on April 10 at Wando Estate, Casterton where we will display the 2013 and 2014 drop trial progeny and showcase the latest in electronic farm management equipment.”

“For AWI, this project brings to fruition one of the key targets identified for genetic investment in our 2013-16 Strategic Plan and will provide a key platform for Merino genetic improvement over the coming decade, building on the great foundations laid over the previous decade. The current Strategic Plan can be found here.

“Importantly the commitment to this program shows how the wool research, development and marketing body is committed to helping woolgrowers find reliable and repeatable genetic gain from both traditional and subjective assessments.”

AWI said researchers and woolgrowers have long known that within any flock, individual ewes differ hugely in their contribution to the grower’s income over their lifetime. Some are ’performers’, who cut a valuable fleece and rear a lamb every year, whereas others are ’passengers’, who may only rear one or two lambs from four attempts, but may look good in the classing race. Some begin to lose fleece value very early in their life, whereas others maintain fleece value with age. Over a lifetime, these performance differences can easily translate into many hundreds of dollars of income gained, or lost.

The challenge has always been to reliably identify passengers from performers at a young age, a problem made more difficult by the recent trend to earlier lifetime performance recording, which can be seen in the increasing drive toward post-weaning recording for fleece traits, AWI said. Given the poor heritability of reproduction at first lambing, and yet the critical importance of reproductive performance across the ewe’s lifetime, the situation has become a major challenge and thus an opportunity for the industry research, development and marketing body to address.

More detail about the trial can be seen in the current edition of Beyond the Bale which is now online and interactive at http://beyondthebale.wool.com