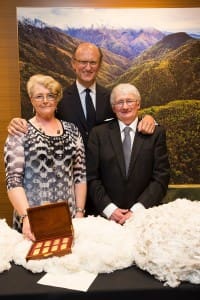 The housed 10.1 micron 850gm skirted fleece from their Rowensville Merino flock at St Helens in south-west Victoria scored 90.45 points to win the prestigious Vellus Aureum Trophy and 500 gms of gold valued at more than $27,300.

The Rowbottoms also won the award last year with a 10.8 micron fleece, taking home 750gms of gold. But despite both gold windfalls now being valued at more than $68,400 at current prices, they will be stored securely off-farm for their retirement.

“I made the comment last year when one bloke said you could buy a new car that I couldn’t see the wisdom in turning gold into tin and plastic, so we haven’t spent it.

“We’re getting towards retirement age and we have to have something if we want to pass the farm as it on to family.”

Award made at opening of Zegna’s new Melbourne boutique

Chairman of the Ermenegildo Zegna Group Paolo Zegna presented the award to the Rowbottoms last night at the official opening of the Italian company’s new boutique at 45 Collins St, Melbourne. The winning Rowensville fleece will be displayed in the window of the boutique for the first time. 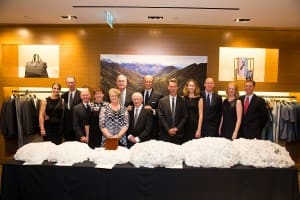 Second place in the award’s housed wool section went to Robert and Pamela Sandlant’s, Pyrenees Park, Victoria, with a 10.4 micron, 920gm fleece that scored 89.56 points and third place was won by  Geoffrey and Heather Phillips, Currawong, Victoria, with a 10.5 micron, 890gm fleece, on 88.77 points.

Count Zegna said it is always an honour to give the awards, the 52nd edition since they were established in 1963.

“To prize the finest fleeces participating to our historical trophies constantly reminds how important wool is for our group.

“Once more I can confirm our commitment in supporting the research of the highest quality of wool, the most significant raw materials of our productions,” he said.

“Superfine wool has always been significantly present in our formal collections and is more and more represented in our casual and younger lines.”

Rowensville was lucky in close contest

Mr Rowbottom said it was tremendous to win the award again, but maintained Rowensville was extremely lucky, though the winning fleece was the finest they had presented for a competition.

“We won it because we had the finest fleece, but not by a lot.

“They were all similar weight, similar points on everything, apart from we had the finest micron,” he said.

“We get the odd fleece finer than that – the odd one below 10 micron but not with enough weight.”

The winning fleece came from 2.5-year-old Rowensville Merino wether, skirted around the coat.

“It wouldn’t be half the weight of the actual fleece.”

The Rowbottoms have been growing superfine and ultrafine wool at St Helens since 1976, improving the average flock micron from 19.2 to 14.9 in the paddock. They have been producing housed wool for the past five years and this clip average around 12 microns.

“But it still has to go up 40-50 percent to be the equivalent of that (2008 prices) and of course costs are higher since then as well.”

Their top line of 13.6 micron weaner this year made 6000 cents/kg, a seasonal record for wool sold at auction in Australia.

“But that is less than half the price we received in 2008 when we also held the seasonal record price.” 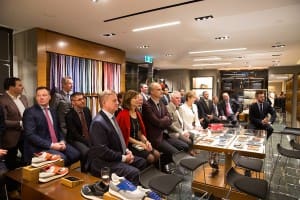 The 2015 Zegna awards at the Collins St boutique.

Zegna has had a retail presence in Melbourne since 2002 and the new 410 square metre boutique is now the largest single brand, dedicated menswear store on prestigious Collins Street.

Last year the Zegna group acquired a majority share in Achill, a superfine merino wool property in Armidale, NSW, a step the company said further reinforced the importance placed on absolute quality and complete vertical integration as cornerstones of its long-standing success.

Count Zegna confirmed the group’s commitment in supporting the research of the highest quality of wool, the most significant raw materials of our productions.

“Superfine wool has always been significantly present in our formal collections and is more and more represented in our casual and younger lines.

“The TECHMERINO line in 100pc wool, which can also be used for active sports, is one of our fastest growing product lines.”

He said the standard of this year’s award entries was outstanding and the group hoped that the Zegna wool competitions continue to be perceived as a significant incentive for wool growers to continue their work, aiming towards excellence in their wool.

“I am also confident – and grateful to Australian Wool Innovation – that the promotional investments they have made in the recent years will contribute to the expansion, appreciation and use of this magnificent fibre in the more important interaction markets.”

Zegna established the first “Ermenegildo Zegna Extrafine Wool Trophy” in 1963 – in association with ASWGA, the Australian Superfine Wool Growers Association – to award and reward the Australian woolgrowers’ commitment to quality, Fleeces, all under 17.5 micron, are judged on the criteria of quality, weight, yield, trueness to type & bloom, conformity of length, evenness and excellence. The Ermenegildo Zegna Vellus Aureum Trophy was launched in 2002 for wool measuring 13.9 micron and finer and recognizes the quest for the absolute excellence in the wool industry. The annual Ermenegildo Zegna Wool Awards are today open to Australia and New Zealand wool growers.