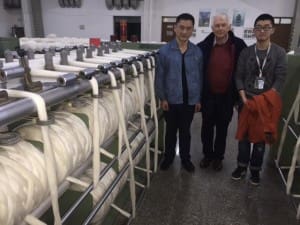 AUSTRALIAN wool grower and garment manufacturer Peter Small wants pain-relief for mulesed sheep or non-mulesing to be conditions of sale for wool.

The wool and lamb producer at Coleraine in Victoria Western District is also chairman of knitting company Quality Softwools Australia, which markets Merino wool garments under three brands in Australia.

On a trip to his company’s contract mill in China last month, he discovered that Australian wool customers were being forced to go to New Zealand and South Africa for supplies of non-mulesed wool.

He wants to achieve an industry commitment to pain relief for mulesed sheep by making its “truthful” declaration a condition of sale, but ideally without regulation.

“My solution to it is, that it has got to be a condition of sale, starting very soon, and I would suggest the first of June this year, that the only wool that can be offered for auction in Australia is wool that comes from growers who certify that their wool is either from non-mulesed sheep or sheep mulesed with appropriate pain relief.

“It will be self-regulation, because if it is an agreed condition by sellers, brokers and exporters that that is a condition of sale you don’t have to get the Australian government or Australian Wool Innovation involved at all,” he said.

Mr Small believed regulation of the condition of sale should be a last resort.

“I fear regulation, because that would mean a whole of inspectors running around the country.

“I think we should be a mature enough industry to self-regulate and sign statutory declarations that are actually truthful,” Mr Small said.

“I would like to think that we could do it with self-regulation and we have to be tough on this.

“It really means that growers have to sign a statutory declaration that they are complying with either non-mulesed or pain relief.”

Mr Small’s comments follow a petition from Italian processor Laurence Modiano and a group of world wool companies and traders who want mandatory pain-relief for all on-farm sheep surgery in Australia, including mulesing and shearing cuts.

The processors also want the Australian wool industry to execute a campaign to tell consumer brands of the efforts its wool growers are making to improve animal welfare. The signatories have said consumer brands increasingly require full traceability and claim that all wool not declared on an AWEX National Wool Declaration is at risk of being discounted.

Mr Modiano has said the international wool industry is held back by the fact that millions of Australian lambs are mulesed without pain relief. He would like to see an increase in the non-mulesed and ceased mulesing rates to satisfy increasing wool demand, but understood why mulesing is done.

AWI already championing the best wool growers in the world

Modiano believed AWI has the closest relationships with consumer brands, but an AWI spokesman has said all the organisation’s global marketing campaigns highlight the versatility, sustainability and providence of Australian wool and champion the best wool growers in the world.

“Whilst former AWI director Modiano suggests AWI has the closest relationship to consumer brands, these organisations themselves decide any collaborative marketing efforts we enter.

“Given the current state of the wool market and our measurement of key projects, we believe these marketing efforts are effective,” the AWI spokesman said.

“CM is steady at 2pc, whereas Declared Mulesed is declining by 1.2pc pa, and non-declared is declining at 1.29pc pa (mirrors the rate of gain in total declared),” the report said.

“It should be 100 percent and the problem is that the growers have got themselves in the bunker and they think that this is just greenies and animal liberationists.

“We could all think that, but the problem is that those people have convinced the market that it is otherwise and perception is this world of markets is everything,” he said.

“My solution to the problem is that pain-relief should not be instituted through a law,” Mr Small said.

“Regulations or a statute will mean a whole lot of inspectors, compliance and cost, and that’s got to be avoided.

“I also think we have got to avoid Australian Wool Innovation getting involved because they are a statutory authority and it can only lead to compliance and a regulatory solution.

“WoolProducers, the exporters and AWEX have got to fix this problem,” he said

“It really needs to be solved by the industry, by the exporters, the growers, the peak bodies, the producers and the brokers.”

Mr Small said the Australian industry had to get out of its “commodity culture” and focus on thinking of wool as a prestigious luxury fibre, but markets would close if the requirement was that wool be from non-mulesed sheep.

“That’s how serious it is.”

He said animal rights organisations have had a massive impact in garment markets because the Australian wool industry had been “so inept in getting in front of the action.”

He believed that many Australian wool growers believed the mulesing/pain relief issue was a joke, some were not necessarily being truthful on declarations to gain a price premium and the disparity in declaration statistics raised questions about the diligence in the reporting process.

“It has got to be tightened up.

“They all think it is a joke, they don’t realise how serious the problem is,” he said.

“I’ve hear wool producers’ sentiments ‘we are waiting for a premium (before using pain relief).

“Well the way it is going, you won’t get a premium, what we will get is a discount.”

Wool growers were fighting for confidence in their product on the mulesing issue, not premiums, Mr Small said.

“I think we should congratulate Laurence Modiano on his initiative.”

Mr Small said the Chinese mill where his wool is processed is a signatory to the Modiano petition. During a visit to the mill in mid-January this year he was told that the mulesing issue was causing Chinese processors “a lot of angst”.

“They’ve got a lot of pressure from their customers – yarn buyers, garment makers, knitters and weavers – for certified mules-free wools.

“I had to explain to him about mulesing, why we do it and the pain relief given, but he said that is all too complicated to try to satisfy his customers,” he said.

“Their solution at the moment is to try to satisfy their customers’ requirements by buying more wool out of South Africa and New Zealand.”

“That is causing them a lot of problems because the price has gone up and now they are finding it hard to find the product even at the higher price.

“He was very concerned about that.”

Mr Small said he read the Modiano petition as offering an “olive branch” to the wool industry that mulesing with pain relief is acceptable.

Mr Small sells all of his QSW garments in Australia and said the mulesing status of his wool was not an issue here.

“Because most Australians to some extent understand the issue and we never have the question asked – it’s not a problem for us.”

He runs about 6000 mulesed Merino ewes for joining to Suffolk rams, but does not declare the mules or pain relief status of the wool on a National Wool Declaration.

“If we move as I am suggesting I would need the bloke I buy the sheep from to declare on the vendor declaration that he uses pain relief.”

What does WoolProducers Australia think?

WoolProducers Australia chief executive officer Jo Hall said WPA felt strongly that there should be less regulatory burden placed on wool growers – not more as the Modiano petition called for.

“Market forces, such as paying premiums, will be far more effective than regulatory enforcement in driving the uptake of pain relief.

“A call for pain relief for all on-farm surgery is completely unrealistic and not supported by WPA as there is currently only one registered over-the-counter pain relief product available to growers which is registered for use on breech strike modification only,” she said.

“There are no other readily available pain relief products for other surgical procedures.

Ms Hall said WPA had previously written to the APVMA calling for the consideration of registering Tri-Solfen for a wider application of pain relief for other on-farm procedures, such as shearing cuts.

Ms Hall said there are many other factors that contribute to good animal welfare outcomes other than pain relief, so to say that mandating pain relief would change all perceived welfare issues in the wool industry is overly simplistic.

“Animal welfare is a key priority for WoolProducers and the Australian wool industry, who actively work in improving animal welfare practices,”

“The industry has invested $59 million in animal health and welfare activities since 2005.”

Ms Hall said AWI already did a lot of good work in the animal welfare area working with industry stakeholders behind the scenes highlighting the positives of the Australian wool industry.

“We find it is discouraging that the signatories are already referring to discounts for non-declared wool, as currently through the open-cry market system there has not been consistent premiums for those producers who are already providing what the customers apparently want.”

Ms Hall said WPA has been a strong supporter of the National Wool Declaration and would like to see more growers complete the NWD, regardless of mulesing status to better inform the supply chain of what is being produced.

“WPA is extremely active in this space and works with many industry stakeholders working on welfare issues.

“This unified approach has been extremely successful in ensuring that the industry is investing monies in priority areas on behalf of all Australian wool growers.”