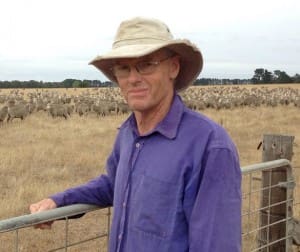 A VICTORIAN wool grower has boycotted an Australian Wool Innovation workshop called to discuss funding and ownership of an online Wool Exchange Portal, in Sydney this week.

Mr Small has been a long-time opponent of the wool levy which funds AWI and has been critical of the Wool Selling Systems Review and the WEP proposal.

Australian Wool Innovation invited about 50 people, or their nominees, to the facilitated workshop to discuss the ownership, financing and function of the WEP, as proposed in the final report of the AWI Wool Selling Systems Review.

Mr Agar said he received an invitation to the March 2 workshop and nominated Mr Small, but received a phone call from AWI’s media manager Marius Cuming, who was opposed to Mr Small’s nomination.

“He was really cranky and said ‘why did you do that? You can’t let him go’.

“I thought it would just be a talk-fest that would go no-where.”

Mr Agar said he not been told “in as many words” that Mr Small could not go to the workshop, but he believed AWI opposition to his nomination showed that the process was politicised.

“I would have thought, if you look at all the elements of the wool production business, the selling system is the bit that probably works the most efficiently.

“It is competitive and it is mostly transparent, what the costs are; the selling system is the least of our worries,” he said.

“And they’ve put all of this energy into changing it, which no-one really wants, that I can see.”

Mr Small said he had been willing to go to the March 2 workshop, but had not received an AWI response about his nomination “one way or the other”.

“There has been no official response.

“Marius told Colin Agar that I wouldn’t be able to go and there was no confirmation that I could go.”

Mr Cuming today confirmed that Mr Small would not have been able to the workshop.

“So there is no point in asking Peter Small along, who is just going to be fighting against it and will have nothing to add.

“We know his point of view, he’s had plenty of input, he has had a great platform in the media, he has had his time and now we are moving on,” Mr Cuming said.

“If someone who is so dead against the industry as he is, and dead against AWI, I think a lot of questions would be asked if we paid for him to attend the workshop.

“Why should wool growers fund him to head to Sydney to oppose this?”

Mr Agar said he also boycotted a WSSR workshop in Melbourne last year and made a slightly mischievous submission to the review.

“The biggest cost in the selling system is the wool tax (which funds AWI) and they are not looking at that.

“The wool tax is bigger than all the other costs put together – the brokerage, the testing and everything.”

Mr Agar is a fourth generation wool grower whose family has been growing wool at Penshurst for “all of this century, the last century and a bit of the one before.”

He does not believe the case for the wool-selling review has been made.

“What’s the case for change?

“It just seem a bit anachronistic that it is an open cry auction, but the reality is it works very well, it is efficient, every one understand it.

“There are things like Wooltrade if you want to do the electronic sight-unseen stuff – that platform is already there.”

Mr Agar said he couldn’t see any point of difference in the WEP to the current marketing options. He believed discussing the ownership and funding of the WEP before discussing it’s acceptance by brokers and exporters was “putting the cart before the horse.”

“My mail is that the exporters won’t support it (the WEP) and they don’t want it.

“So they are foisting something onto the selling system that no-one wants that I can see.”

AWI chief executive officer Stuart McCullough has argued there is a need for ‘digital disturbance’ in the wool selling system, but Mr Agar said this was “pulling on the wrong rein.”

“Nothing needed doing in that area.”

The workshop will be held at the Cliftons Conference Centre, Level 13, 60 Margaret Street, Sydney. AWI is paying for return economy class flights for workshop participants from their closest airport to Sydney, plus accommodation in Sydney if flight schedules preclude same day travel.