Mr Hall was best known for steering AUSMeat (the Authority for Uniform Specification of Meat and Livestock) as chief executive for eight formative years from its launch in 1985. 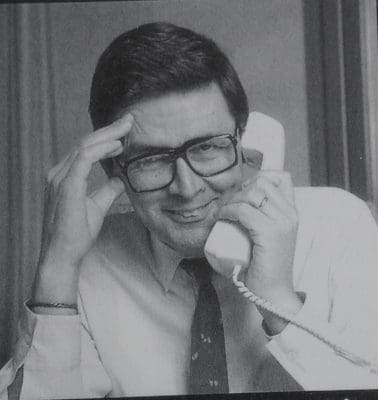 John Hall, in his heyday at AUSMeat in the 1990s

AUSMeat’s primary objective was to design and implement an objective livestock and meat description system that could replace price averaging of slaughter stock, and facilitate the selling of carcases on an over-the hooks basis. This was achieved through the launch of the AUSMeat language, establishment of AUSMeat standard carcase trim, and the launch of the first AUSMeat carcase feedback sheets in 1990.

A massive nationwide education campaign was rolled-out from the late 1980s to familiarise cattle and sheepmeat producers with the language, and how to understand and interpret feedback sheets, which now form the basis of much of the typical slaughter cattle transaction between beef producers and processors.

Feedback became an industry buzzword, with feedback data sheets for carcase-based trading and the commencement of the first National Livestock Feedback held as part of the inaugural Rockhampton Beef ’88 event.

At its height, AUSMeat was a powerful and influential red meat industry organisation, with activity out of its Brisbane head office including both meat and livestock research, the development of product description and livestock languages, quality assurance systems, processor and feedlot accreditation and numerous other functions.

At times it clearly rivalled the Australian Meat & Livestock Corporation for industry prominence, and headlines – sometimes to AMLC’s displeasure.

AUSMeat was jointly owned by processors and producers, and this process inevitably raised conflicts between the two sides, as well as domestic versus export factional interests. Mr Hall’s job was widely recognised as one of the toughest in the Australian meat and livestock industry, and he proved expert at navigating the broader industry’s interests through the minefields that emerged.

Earlier he was chief research officer at the Livestock & Meat Authority of Queensland, having earlier migrated from the UK to find work in Australia as a QDPI dairy AI technician. His interest in beef research grew after shifting to Swans Lagoon Research Station near Ayr in North Queensland.

A move to Emerald followed where in addition to a full workload he took on external studies in economics. He continued those studies after a move to head office in Brisbane and completed his Master’s degree in 1978.

The carcase classification work he championed at LMAQ was carried out in conjunction with Dr Ray Johnson from the University of Queensland Vet School, taking in Bundaberg, Kilcoy, Beenleigh and Mackay abattoirs. The research led to development of price grids based on hot carcase weight, fat depth and dentition. Borthwicks Mackay was the first to implement grids, followed by Townsville and Rockhampton.

He left QLMA to briefly take up a role of deputy director-general of the Tasmanian Department of Agriculture, before being tapped for the new AUSMeat chief executive role by AMLC managing director Peter Frawley.

Steve Martin’s processing industry history, “World on a Plate,” recounted that Mr Hall was uncompromising in the position, mainly because he had watched the production sector talk about reform since the 1960s, and ‘nothing ever happened.’

“Here was a narrow window of opportunity to do something useful,” World on a Plate recounts.

“John Hall knew there was fierce opposition. But he had faith in AMLC’s ability to stick to the plan, and get something done.”

“John Hall’s great contribution to the early years of AUSMeat is recognised and applauded by all,” it said.

Mr Hall left AUSMeat in 1992, moving into consultancy as a working partner with Australia Agricultural Consulting and Management before buying out the business. He later did work in South America, particularly Uruguay and Argentina.

Having sold the business he retired to a small cattle property Kin Kin in Queensland’s Sunshine Coast hinterland.

He continued to follow industry affairs closely, and remained a regular contributor to Beef Central’s reader comments until recent times.