Mr McIvor made a major contribution to the live export trade over six decades, both as an active trade participant and industry representative. 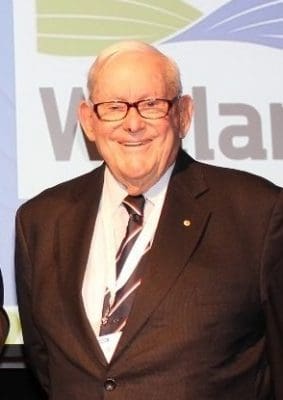 He began as a trainee scoured wool valuer for New Zealand Loan Ltd Sydney in 1950 and subsequently held a range of different roles over the following decades, including as Melbourne wool buyer for Victor Dekyvere & Co, before establishing his own wool exporting business, McIvor Selios.

As principal of McIvor Selios, he made several trips to Guangzhou (known then as Canton), which he recalled as a vastly different city than what it is today. Through his wool connections, he helped pioneer the export of sheep to China in 1967 in partnership with Dalgety Australia. About 2000 Polwarth, Border Leicester and Corriedale ewes were bought mainly in Victoria and sent as deck cargo in six shipments through Hong Kong to Shanghai at the height of the Cultural Revolution.

In 1977, McIvor Selios was acquired by Dalgety, with Mr McIvor being appointed general manager of Dalgety International Trading. Under his guidance, the company became one of Australia’s largest livestock exporters, developing markets for breeder cattle in Indonesia, slaughter cattle in Japan and the largest single deal of 300,000 breeding sheep to Romania in the early 1980s.

Dalgety during the early 1980s became a major exporter of cattle and buffalo to Indonesia, and later the steer trade into Japan.

Throughout the late 1980s and early 1990s, Mr McIvor served as a board member, director and chairman of numerous industry organisations, including the NSW Live Exporters’ Association, the Australian Wheat Board, the Wool Research and Development Corporation, the Australian Wool Exchange and the Trade Policy Advisory Council. He was also chaired the Australia/China Business Council from 1989 to 1991.

He travelled on numerous trade delegations as an industry advisor to the then Prime Minister Bob Hawke; Primary Industries minister John Kerin, and various other government officials.

Although officially retiring in 1993 to manage his grazing property in the central west of New South Wales, Mr McIvor remained actively involved in the industry affairs as executive director of the Australian Livestock Exporters’ Council, a position he held for more than a decade.

He also served two terms as chairman of the Australian Livestock Exporters Council, from 2003 to 2005 and again from 2008 to 2010 – important periods that saw the live export industry eventually gain control of its own funding and levies.

Even after he stepped down as chairman after his final term, Mr McIvor helped continue to guide the industry’s affairs, and represent live exporters in meat and livestock industry matters.

It was during his first chairman’s term that he faced one of the industry’s greatest crises, the Cormo Express incident, which led to sweeping changes in the way the industry operated.

He was inducted into the Livecorp Hall of Fame in 2002, and in 2008, was made a Member of the Order of Australia (AM) for services to agriculture, especially in the fields of livestock export and wool.

Funeral arrangements will be added to this item once they are decided.