Use trust to build agriculture’s social licence with consumers

PRODUCERS looking to defend their industry against attack should rely on trust rather than science and facts.

That was the stark message from consumer trust expert Charlie Arnot, from The Centre of Food Integrity in Missouri, US, to delegates at LambEx 2018 in Perth this week.

A change in society meant science was no longer a good defence when answering criticisms about farm practices, so farmers had to have a “social licence” to operate or trust that what farmers did was acceptable to society.

“In today’s society, scientific knowledge no longer carries the weight it once did,” Mr Arnot said.

“In fact, it may simply be discarded by a growing number of consumers who look to social sources of information, especially on line, to guide their decisions.”

“All organisations, large or small, operate with some level of social licence – the privilege of operating with minimal formalised regulations based on maintaining public trust.

“If the public trusts us to do what’s right, then there is no need to impose further restrictions,” he said.

“And we’ve seen that social licence put at risk when we see things like the 60-minutes footage (of sheep on live export boats) and stories on live export.” 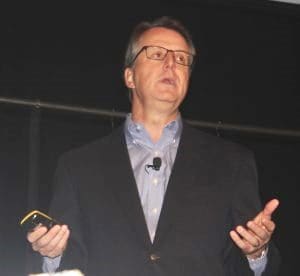 Mr Arnot said he had worked in US pork industry for 10 years and went through a couple of situations similar to those of the live export footage.

“When you see this happening, it takes your breath away.

“It’s like someone has kicked you in the stomach because you feel so upset with what happened,” he said.

Losing social licence can impact on the bottom line in a number of ways, Mr Arnot said, including further legislation imposed on industries, or even a decrease in access to technology.

“We have seen in US over and over again, something that has been approved can be taken away because the market no longer approves,” he said.

But he warned against focussing only on issues that had raised their head, such as live export.

“Don’t just look in the rear-view mirror – it’s too late by the time you’ve had a crisis and your social licence has been put at risk.

“Start thinking about what’s next, not what has been,” he said.

“What is the next potential threat to your social licence for the sheep industry to be working on now, or five years from now, or ten years from now, because that is when those investments will pay off.

“You can mitigate the impact of what you are going to lose with live export if you have the opportunity to prevent that from happening going forward with the next issue.”

Mr Arnot said transparency and engagement were key to building trust. This could be done effectively and at low cost through media platforms, but it needed to be the right kind of engagement.

“We need to stop persuading, correcting and educating.

“We should be listening, asking and sharing,” Mr Arnot said.

“When someone raises questions about live export or mulesing, the value they share with you is a commitment to animal well-being.

“It’s a place you can make a connection and have a conversation and you can ask questions to try to understand their perspective and share knowledge if necessary, but you share it through your values.”

“We need to commit to transparency – it is the single most important thing we have for building trust for us today.

“When we are transparent, that bias that we are going to put profit ahead of public interest goes away.”

Mr Arnot said the two-thirds of the general community in the US wanted to know more about farming and he would be surprised if it was different in Australia.

“Embrace the fact that transparency is no longer optional. The sooner we are more willing to be transparent, the sooner we will be able to build trust.”