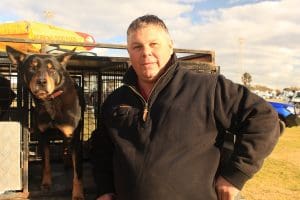 On the Bendigo showgrounds at the Australian Sheep and Wool Show, Rob and his eight year-old dog Heritage Park Jim firstly won the improver with two clean runs to score 142 points.

Although Rob and Jim’s score of 75 points in the open event wasn’t enough to get a place, it put the pair among the top 20 dogs and handlers to go into the championship round. An 80-point run put them into the top six dogs for the championship final and a 78-point run secured the championship with a total of 233, 18 points clear of Rod Cavill and Tundabardi Grub.

“One thing I truly love seeing is watching the underdog winning big things instead of the same few every time….. Huge congratulations Rob Hart you are one of the nicest and humblest blokes around and it was fantastic to see you kick some butt!!!!” she said.

Rob said a dog had to have good cover and hold outside the yards, and enough push and presence to push the Merino wethers around the Bendigo course.

“I was surprised to win, but he’s a smart dog and he is more suited to working Merinos than crossbreds.” 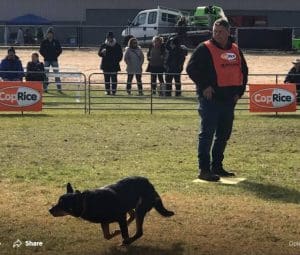 At home, Jim is a magnificent farm dog, Rob said, and is now recognised as the “overseer of the younger (dog) tribe” in his role of getting in the training sheep for the pups to work on.

“My daughter Hayley, 20, has even won trials with him … she has been on placement from Longerenong Ag College on the farm that I used to manage.

“She’s been taking him out to do the day-to-day farm work and so she’s saying that’s why he won…,” Rob said.

“So I said I’m glad I had him back for two weeks to pull him back into gear.”

Rob regards Jim as an all-rounder, able to muster rough paddocks and read his stock in the yard.

“That’s what he did so well at Bendigo.”

Rob said Jim is by former Australian yard dog champion Karrobar Sargeant out of Halliday’s Sophie. He will continue to trial Jim up to the state championships in Casterton in November and the next national titles.

Heritage Park Jim had the knack on the Merinos 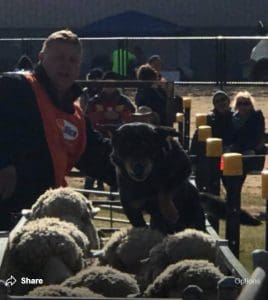 Rob Hart sends Jim to the fron of the race at Bendigo. Photo – Mish Whyte.

“The farm dog stepped up and won it, not the soft biddable trialling dog – which is when they come unstuck.

“When it is tough to get a consistent score over your three scores, and you’ve got big tough Merinos rather than good flowing sheep – it was the day-to-day farm working dog that had the power to do it.”

Judge Ricky Jones said Jim stood out because he was the only dog at Bendigo to complete the course five times within time.

“I think he was the only dog that got through the course every time and he did it twice in the improver and three times for the open and championship.

“He was the just the right dog for those sheep and he just had the right amount of force, hold and cover, without intimidating them, and he was clean – he didn’t bite or do anything that was detrimental to completing the course,” Ricky said.

“He was a good old dog that had good hold and cover, and he tail-end force when he needed it, and he was able come in and do a bit of barking while covering and holding.

“He was an experienced dog that got a flow up the draft every time; he knew how to start them.”

Ricky said it was difficult to get the wethers, carrying eight-months wool, to flow up the draft, but Jim had the knack to set the sheep up without turning them onto himself.

“He just had the effect that was required to do the job and he did it five times.

“You couldn’t put it down to luck mate, it was reality.”

Trial co-organiser Rod Cavill said the successful trial attracted a large crowd. O’Sullivans Transport supplied a run of 700 one-mark Merino wethers, which proved to very consistent over the three days of competition. The judge for the maiden and novice course was Gary Sharrock. Mr Cavill thanked the sponsors and the many willing helpers throughout the trial.