EUROPEAN Union trade chief Peter Mandelson once famously said “the markets don’t like instability and they don’t like uncertainty.”

And so, the spot auction and forward markets this week suffered from the general malaise of global uncertainty.

This week it took the form of a strong Australian dollar. The dollar’s trajectory was fuelled by the higher energy prices which impacted on the price levels in spot and forward wool markets.

All micron price guides (MPGs) fell between 5 and 26 cents with the greatest impact being felt by the medium microns. The 21 MPG declined 26 cent or nearly 2 percent.

The forward market traded sparingly with buyers tending to have a wait and see approach in the current undefinable landscape. Buying across the strip started to return with levels set in line with this week’s currency impact. The new season and New Year are bid around 2pc under current cash, with 19 micron bid at 1660 cents and 21 micron bid at 1300 cents.

Global uncertainty aside, we are likely to see forward bidding levels stable ahead of next week’s auctions commencing Wednesday. With excess of 50,000 bales on offer, it is unlikely we will see a break to the top side. 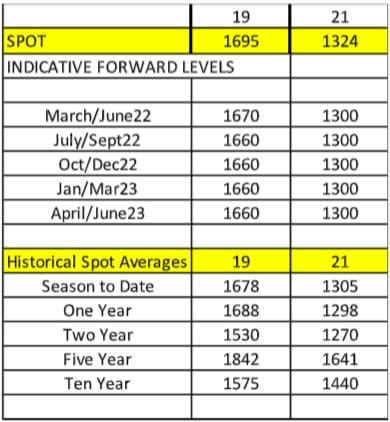