The Pyrenees Park bale of Merino wool helped shedded wool producers Robert and Pamela Sandlant at Lexton in Victoria retain the award against competition from the top New Zealand bale, an 11.3 micron entry from Barrie and Yvonne Payne, Visulea, at Maungati.

The award was presented in Sotheby’s lounge in New York last week, with Loro Piana chief executive officer Fabio d’Angelantonio congratulating the Sandlants for their win in the 20th edition of the Record Bale award.

“It is with proud and affection that this testifies the great passion that still bonds us all in this mission after so many years.

“We feel privileged to have such a prestigious competition in association with our brand’s name,” he said.

“The commitment of the company and the breeders are proof of the importance of this struggle and the sustainable supply chain for the ultimate extra fine Merino wool in the world, not only in terms of fineness but of length and tenacity as well.” 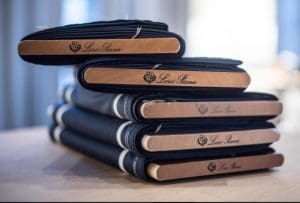 Loro Piana said only about 40 made-to-measure suits are produced from the 150 metres of cloth made from the Record Bale, fashioned in the Loro Piana boutiques and in select top tailoring shops around the world, targeting a restricted number of true connoisseurs. Buyers of the Record Bale fabrics benefit from pre-emption right on future allotments so as to collect, year after year, the entire gamut, the company said.

The Sandlants also hold the honour of producing the finest ‘World Record Bale’ ever entered in the competition in 2015, a 10.3 micron bale, surpassing a previous record of 10.6 microns.

Every year, Loro Piana buys its ‘Record Bales’ from selected wool growers in Australia and New Zealand before presenting the award. Each bale is enough to produce only a few dozen lengths of suiting fabric, which are offered in exclusive colours and designs, and distinguished by the special selvedge and label certifying the year of shearing and the origin and the fineness of the fibre. Loro Piana aims to encourage and guarantee the production of increasingly higher quality wool through the award.

Pyrenees Park and Visulea are also two of only four farms in Loro Piana’s ‘Gift of Kings’ project — two in Australia and two in New Zealand. The other farms are Millbank at Walcha in New South Wales, and Somerton Park at Yaldhurst, Canterbury, New Zealand.