AN INTERACTIVE field day at the Trangie Agricultural Research Centre next month will showcase how large-scale electric fencing systems are protecting the Trangie-Nevertire Irrigation Scheme from feral animal incursion.

The September 23 field day, hosted by Gallagher Australia, is aimed at the practice and theory behind how electric fencing has protected the irrigation scheme from feral animal challenge.

The Trangie-Nevertire Irrigation Scheme (TNIS) serves 90 farms covering 100,000 hectares (250,000 acres), with the scheme irrigating one tenth of that area. Crops under irrigation in the area include grains, cotton, oilseeds, pasture, lucerne and vegetables. The annual additional production generated by the scheme’s irrigation tops $35 million.

Gallagher has played a key role in the design and implementation of the fencing system to protect and monitor the large investment from the damage that could be caused from ferals including kangaroos, pigs and wild dogs. 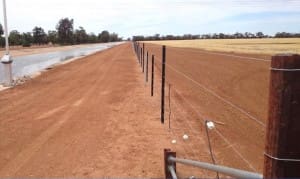 The i Series units have controllers that can be put where they are easily seen (not necessarily next to the energiser), allowing the fence’s condition and energiser performance to be monitored. The energisers can also be controlled with a remote and fault finder, meaning no time is wasted returning to the energiser to turn the unit on or off.

Fence monitors strategically placed divide the fence system into zones, making it quick and easy to locate a fault (on the controller, the number of the monitor near the fault changes colour).

The irrigation scheme’s energisers are all solar-powered units and have lightning diverters fitted.

The Trangie-Nevertire irrigation Scheme, which includes 240km of channel works, was built in 1970 at a cost of $1.1 million, with the first commercial water flowing in 1971.

From the mid-2000s, the TNIS traded water entitlements that were likely to be saved from the modernisation and received $115 million to upgrade the irrigation-delivery system and provide a stock and domestic pipeline from the Federal Government’s PIOP (Private Irrigation Operators Program). It was a project 10 years in the making.

Guest speaker at the field day will be Rob McCutcheon, the coordinator of the Trangie-Nevertire Irrigation Scheme Site. He will outline the fencing project and the irrigated land it successfully protects.

A site fence tour and inspection will take place, as the practical part of the field day, after morning tea.