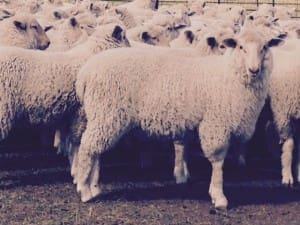 LIGHT and medium trade sheep prices were boosted in saleyards this week as export processors sought stock to supply the annual Middle East Festival of the Sacrifice Eid Al Adha.

Frewstal operations manager Greg Nicholls at Stawell said the sheep have to be delivered for processing on September 23, 24, 25 and 26.  During the festival, Muslims may symbolically sacrifice an animal, usually a goat or sheep, and divide it among themselves or just buy generous portions of meat for a communal meal.

“We are trying to get an average of about 18kg,” Mr Nicholls said.

Mr Nicholls was hoping to source shorn wethers or ewes after lambs were weaned, but has also had to source stock in saleyards for lot feeding.

“Our mutton job has been enormous for the last four weeks – we have been yarding 12,000-14,000 sheep and if they were going to wind the job back a bit, that’s the opportunity to do it and they haven’t.

“I’d say they are getting rid of everything they are killing at present.”

Brian Unthank Rodwell auctioneer at Corowa Peter Ellis said the lift in lamb prices this week was due to supply and demand.

“The new season lambs are coming, but they are not coming quick enough.

“The (Corowa) market is yarding 3500, when this time last year we would be more like triple that around here and also down south at Bendigo,” he said.

“The northern NSW markets are playing with a few, but we aren’t, and it is all to do with the cold and wet winter.

“Hence we are getting paid and it’s a wonderful thing if you’ve got them.”

“At this time of the year they would normally be yarding probably double that.”

“I reckon our sucker job was $5-$8 dearer than last week, but the quality of the lambs was a bit better too.”

In NSW, the NLRS quoted over-the-hook lamb and mutton rates as unchanged week-on-week. Rain around some areas over the weekend has tightened supply and saleyard prices are still holding strong. Lamb rates range from 530-600c/kg for crossbreds and 460-500c/kg for Merinos. Mutton rates range from 270-400c/kg.

Tasmania’s over-the-hook rates for lambs and sheep were quoted as unchanged, with lambs ranging from 540-600c/kg and mutton at 310-360c/kg. No WA OTH update was available at the time this report was published.

The NLRS Eastern States Daily Indicator for restocker lambs rose by 13 cents to 559c/kg early this week, but most other lamb indicators lost ground.

The NLRS said it was a pretty good quality yarding with a good mix of well-finished new season lambs and heavy weight old lambs. Merino lambs were also well-supplied.

The NLRS said the yarding included about 3500 new season lambs. Quality was good in the new season lambs with trades and heavy weights best supplied. Old lambs were well-represented by the heavy trade weights and heavy lambs, with plenty coming off crops and feeders. Not all the usual buyers operated, but strong competition lifted prices to dearer levels.

The NLRS said rain reduced sheep and lamb numbers. There was a fair supply of very good quality young lambs penned along with some good quality old lambs. The usual buyers operated. Market trends were $8-$9 dearer for good quality young trade lambs. Trends varied in the old lambs, with some of the secondary quality lambs selling cheaper. The better quality trade and heavyweight lambs remained close to firm, with quality varying price in some cases. Light and medium weight ewes generally sold firm to cheaper. However, the small numbers contributed to some plain condition lightweights selling to a dearer trend. Wethers were dearer with low numbers contributing to quality related price change.

The NLRS said lamb quality was similar to the previous sales with some good lines of finished lambs and the plainer types. The usual buyers competed in a dearer market.

The NLRS said lamb numbers increased as the flow of new season lambs starts to build. The yarding comprised 4493 young lambs and 1366 old season lambs. The quality and consistency of the lead pens of young lambs was impressive and attracted strong support from domestic and export buyers.

Price trends were similar to a fortnight ago, although extra weight in the top drafts meant three pens estimated at 27-28kg cwt sold above $170 to a market top of $173.20. There was only a scattering of old season lambs in the yarding and support for these was selective, with quality a factor.

The majority of the young lambs were good trade weights above 22kg cwt and prices consistently ranged from $148-$165, or 620-630c/kg cwt, with odd pens higher. The top few export weight pens averaged just shy of 600c/kg cwt, based on skin returns of $12. There were only limited pens of lighter weight young lambs which sold from $109-$129. The offering of old season lambs was limited and mixed and heavier types were cheaper while lighter weight kill types, including some Merinos, averaged dearer.

The NLRS said fewer new season lambs, Merinos and old season crossbreds were yarded. Quality was generally plainer and most noticeably in the young lambs, where most pens showed signs of dryness in the skin and varied fat cover, once off the top pens. All the regular buyers attended, but not all exporters or domestic processors operated at their usual capacity. Price results were mixed depending on quality and carcase weight.

The better presented drafts of young lambs were $2-$7 dearer, while lighter types suitable for processor orders were cheaper. The same trend was evident in the old lamb section, where the limited runs of quality trade and export lambs were dearer, while secondary domestic and lightweight slaughter lambs were cheaper. Domestic buyers paid to $174.60 for young lambs and to $165 for old lambs. Competition for light weight lambs was weaker, particularly on secondary old season lambs lacking carcase finish.

Competition was strongest on the middle drafts of new season lambs suiting supermarket and domestic orders, with the 22-24kg cwt types averaging an estimated 636c/kg, at nearly $156. Sales of young lambs were estimated up to 660c/kg. There were only limited pens of young lambs over 24kg cwt, which sold from $165-$174.60.

In South Australia at the SA Livestock Exchange near Dublin on Tuesday, the agents yarded 10,117 lambs, 14 fewer than last week, and 2622 sheep, 166 more.

The NLRS said the crossbred and Merino lambs sold to solid competition from the usual trade and processor buyers. New seasons lambs were plentiful, the quality was generally very good and buyers took the opportunity to secure numbers. Feeder buyers operated on new season lambs and restockers were selectively active on woolly Merino lambs.

The NLRS said a smaller field of trade and processor buyers was active, while restockers virtually had no impact on the market. More new season lambs came forward, and with quality and weight lacking, prices were firm.

The NLRS said quality was similar to last week, but there was not as much weight in the new season lamb drafts. There were some good drafts of wether lambs and young wethers which met solid competition from processors and live export buyers. All buyers were active and competition lifted across most categories. Live exporters and processors lifted prices for wether lambs to meet orders.

Ewe weight and quality was good. Ewe mutton prices lifted, particularly for the lighter weight drafts. Light mutton made $41-$67 and the 2 score medium weight mutton was $4 dearer, averaging $72. Better condition and heavy weight ewes sold close to firm at $72-$112.50, with full wool drafts topping the market. Restockers paid $50-$94 for suitable drafts, with most dearer by close to $5. Wether demand to meet export requirements lifted prices by close to $5/head. Live exporters paid $80-$120 for shorn wethers and up to $139 for extra heavy, longer wool drafts. Lighter and store drafts suitable for restockers made $53-$109 and were close to $10 dearer. Rams continued to sell to solid demand, with ram lambs making to a top of $120. Young rams to live exporters and feeders made $50-$103 and old rams to processors sold from $20-$70.