Trade lambs rise above 600c/kg and mutton makes over 430c 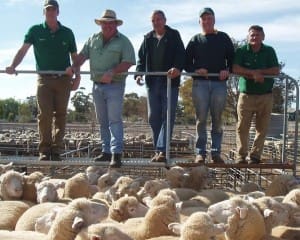 Trade lamb prices moved more surely up to and above 600c/kg and heavy lambs sold to $204 in saleyards mid-week, as domestic processors and exporters sought supplies from smaller offerings.

Many trade lambs in saleyards are now selling above current grids and equal to forward contracts of 580-590c/kg for 18-25kg lambs, delivered June.

Sheep prices also improved further from the start of the week, reaching 434c/kg at Wagga and pushing the National Livestock Reporting Service’s Eastern States Daily Indicator for mutton up four cents to 400c/kg and the national indice to 399c/kg.

Trade lambs to settle around 600c/kg

Elders Wagga auctioneer Joe Wilks said lamb prices were generally around $10 dearer with the best heavy lambs making to $204. Crossbred ewes sold to processors for up to $130.

“The sale started off very strong and you wouldn’t it got dearer, though with the last agent selling buyers had to fill trucks and prices were very sporadic and a lot dearer in places.”

Mr Wilks said lamb yardings across NSW were down this week with processors needing to pay more to get lambs. Some light lambs also sold to a Tasmanian processor.

“A lot of store blokes and traders had to lift their price another $8-$10 and were still not getting much.”

He said yardings were new reduced due to many farmers getting on tractors after recent rain.

“Our lambs yesterday were anything from 570-610c/kg cwt and I reckon you are looking at it hovering around that 600c/kg mark for a fair while.”

The NLRS quoted all Eastern States Daily Indicators for lamb as improved mid-week, apart from restocker lambs which lost one cent to close on 545c/kg after Thursday’s saleyard sales.

The NLRS said following the excellent rains over the past few days numbers were back considerably. The mixed yarding of lambs had some good heavy weights and a fair number of lightweights. Lightweight lambs were $12 dearer, with the 12-18kg cwt 2 scores selling from $70-$99. Trade lambs were $14-$18 dearer, with the 18-22kg 3 scores making $102-$137, to average 568c/kg cwt.

The NLRS said lamb numbers lifted despite good rainfall in the supply area. Quality was affected, with more secondary lambs penned. Heavy trade weights and heavy lambs were well-supplied and there more light weights. All but one of the usual buyers operated in a dearer market compared to the last sale held a fortnight ago.

Numbers dropped significantly with producers now sowing crops after substantial rain across the region. Lamb quality was mixed across all weights and grades. All buyers and processors operated in the much dearer market.

Plenty of trade lambs sold above 600c/kg cwt, with the majority averaging 594c/kg. There were fewer Merino lambs and well-finished pens suitable for the trade sold $7-$13 dearer. Plainer light weight lambs were keenly sought by processors and prices lifted $8-$12 due to the lack of numbers. Heavy and extra heavy lambs sold to strong competition, though there was a greater variation in quality. The bulk of the heavy and extra heavy lambs made from $144-$204. Heavy lambs averaged 579c/kg while the extra heavy pens averaged 563c/kg.

Sheep quality was mixed with most being medium weights. Merino ewes suitable for the trade were in reasonable supply and prices were generally unchanged to $3 cheaper. Trade sheep made from $74-$117 to average 415c/kg cwt. Heavy sheep were in limited numbers, selling from $110-$103.20. Heavy wethers sold to $138.20, to average 434c/kg cwt.

Sheep of all weights and grades attracted spirited competition. Prices were firm to $2 dearer for light weight sheep, $3-$5 dearer for medium mutton and up to $10 higher in isolated sales. Heavy export sheep were also firm to sometimes $6 dearer, especially the Merino wethers.

Horsham’s wether mutton lifts up to $20

The NLRS said the usual buyers operated strongly on the very good quality offering of trade weight and heavy lambs.

An excellent yarding of mainly heavy sheep sold to strong competition, with ewe mutton up to $10 dearer and the wethers making up to $20 more in places. A pen of 220 Merino wethers, estimated at 38kg cwt in near full wool, sold to a market top of $150. 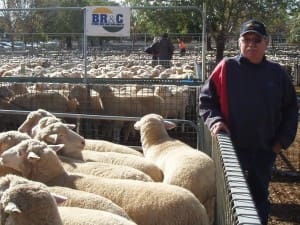 At the Ouyen Livestock Exchange on Thursday, the agents yarded 9397 lambs and 1984 sheep.

The OLE said the market trend and stronger buyer competition for quality pushed prices for heavy export lambs to $197 or 560c/kg cwt, making them $5-8 dearer than at the last sale.

The NLRS said one regular buyer was absent, but this didn’t stop prices from rising, with better quality and weights coming forward.

The NLRS said it was a mainly average quality yarding. Competition was solid from buyers and prices were firm on last week’s very good rates.