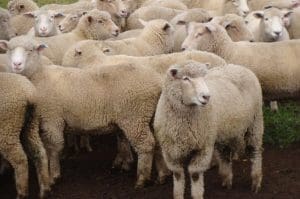 In several instances at Wagga and Carcoar in NSW, and at Hamilton and Horsham in Victoria, drafts of light, trade and heavy slaughter lambs with skins valued at 0-$12 sold for more than 700c/kg cwt and restockers paid up to 800c/kg.

At the Wagga Wagga saleyards in New South Wales extra heavy lambs sold from $180-$234.20. Riverina Livestock Agents clients Jamie and Kerrie Cross sold 62 September-drop Poll Dorset cross lambs with $12 skins for their all-time top price of $234.20 to Southern Meats at Goulburn. Their second line of 73 made $220.

Mr Cross said the homebred lambs averaged 74kg lwt before trucking and were finished on grain for 4-5 weeks.

“It’s real good – I don’t whether it is sustainable or not, but we’ll take it while we can.”

RLA director Tim Drum estimated the top Cross lambs would dress at about 38kg. Although he said processors would start to wind down operations as supplies tightened he believed the lack of good lambs available would sustain prices into August. He said supermarkets paid $188 for 24kg-plus cwt lambs for $11 skins at Wagga.

Meat and Livestock Australia said eastern states lamb yardings reduced this week after the weekend rain, down 3 percent week-on-week to 140,608. Average weekly eastern states lamb slaughter for the year-to-date has remained in line with 2015 levels, at 355,982 head, although this is 10pc above the five-year average of 324,604.

Week-on-week the ESDI for Merino lambs was up 10 cents and up 12 cents for light lambs. The NLRS said the wet weather has helped the restocker lamb indicator to increase 33 cents week-on-week. Typically in winter, restocker purchases ease, hovering below 10,000 head per week at NLRS-reported markets, MLA said.

MLA said mutton supply usually contracts at this time of year, with processor maintenance shutdowns, wintry conditions and lambing taking place. Average weekly eastern states mutton slaughter for the year-to-date at 98,501 is down 4pc from year-ago levels and 12pc lower than the five-year average of 112,381.

The tighter supply helped the mutton indicator rise 17 cents week-on-week, including an 11-cent lift on Thursday to 414c/kg, the highest it has been since August 2011. The record lies at 481¢/kg, set in March 2011. The national mutton indicator is on 413c/kg, also up 11 cent son Thursday.

Major sheep and lamb processors are expected to increasingly match their slaughter operations with supply and seasonal maintenance in July and August, after the widespread winter rains and in the lead-up to the main new season spring lamb turn-off. Normal seasonal maintenance closures are also expected to be brought forward and possibly extended depending on the supply situation in July and August.

The NLRS said it was a much smaller yarding due to widespread rainfall in the supply area. Quality was mixed, there were several good lines of well-finished supplementary-fed trade and heavy lambs along with leaner lighter lambs. All the usual buyers operated in the dearer market.

The NLRS said lamb quality was fair with a good number of well-finished lambs. There was a handy offering of heavy and extra heavy lambs, a good number of trade weights. The usual buyers competed in a dearer market.

The NLRS said lamb quality was more mixed with a good supply of trade weight and light lambs and fewer heavier lambs. The full winter field of buyers, less an export processor, operated in the stronger market.

The better conditioned medium and light lambs were generally $5-$10 dearer and heavy lambs sold unchanged. Restockers from South Australia paid $86-$107 for 2 score store lambs and local agents paid $20-$40 for very light 1 scores. Light weight 2 score lambs generally sold from $78-$110, with a one pen sold to a restocker making $122 at close to 800c/kg cwt.

The NLRS said the quality of the lamb yarding was average to good. It included 900 Merino lambs. The usual buyers operated strongly in a mostly dearer market.

Heavy lambs made to $200, with better covered heavy trade weights selling from $146-$170 and averaging around 650c/kg. Lambs sold up to $5 better, with select pens of trade weight lambs showing the most improvement. Restocking activity was limited, with lambs selling to $105. Merino lambs mostly sold from $110-$158 at around 560-570c/kg.

In Western Australia at the Katanning saleyards on Wednesday, the agents yarded 6358 lambs, 979 more than last week, and 4000 sheep.

In Queensland at the Warwick saleyards on Wednesday, the agents yarded 1354 lambs and hoggets, and 381 sheep.

Agents quoted the market dearer for all descriptions in the smaller yarding of sheep and lambs. The top 58.3kg lwt lambs made $182 for Carsam Pty Ltd of Nobby.

At the northern Tasmanian saleyards at Killafaddy and Powranna on Tuesday, the agents yarded 1500 lambs, 200 more than last week, and 800 sheep, 200 more.

The much smaller number of sheep sold to strong competition. One regular exporter didn’t operate, but mutton prices were held firm, with light sheep making $45-$63, medium weights $75-$88 and heavies $98-$116.