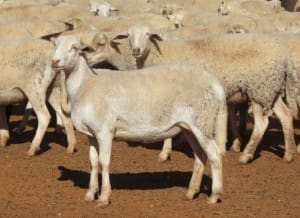 These 6-9 month-old Dorper and White Dorper lambs, 13.2kg cwt and mostly score 1, sold for $95.50 at Broken Hill in NSW on AuctionsPlus this week.

The depth of processor demand for lambs mid-week was highlighted by the improvements in the National Livestock Reporting Service’s national and Eastern States Daily Indicators for trade and heavy lamb yesterday.

The ESDI for mutton rose 3 cents to 3438c/kg and the national indice closed 3 cents higher on 364c/kg.

In New South Wales at the Central Tablelands Livestock Exchange at Carcoar on Wednesday, the agents yarded 6250 lambs, 250 fewer than last week, and 3400 sheep, 700 less.

Restockers were very selective when making purchases due to the perennial problem of lambs cutting teeth. Well-finished supplementary-fed trade lambs were keenly sought, and there was a clear price distinction between grass-finished pens.

Generally trade lambs sold $9-$14 dearer, due to increased demand from major domestic processors. Trade lambs generally made from 573-589c/kg cwt, but there were plenty of sales above 600c/kg. Merino trade lambs attracted premium prices regardless of skin length. Southern export processors had the greatest influence over the lighter weight categories, with lambs sold to slaughter averaging around 557c/kg. Restockers stepped away from the market, with only a handful of pens returning to the paddock at $66-$89.

Heavy and extra heavy lamb numbers were reasonable, and supply and bidding was stronger from the commencement of the sale. Heavy lambs sold from $146-$163, to average 567c/kg. Supply pressure built as the market progressed for the extra heavy pens, as buyers scrambled to fill loads. The better finished heavy pens sold at $170-$209.20, or 520-567c/kg.

The NLRS said lamb quality was very good and most regular buyer operated in the dearer market.

The NLRS said lamb quality varied from good to plain in an overall mixed yarding. The regular buyers attended, determined to fill orders in the dearer market.

In Western Australia at the Katanning saleyards on Wednesday, the agents yarded 5000 lambs, 3500 fewer than last week, and 7168 sheep, 867 less.

In Queensland at the Warwick saleyards on Wednesday, the agents yarded 1342 lambs and hoggets, and 708 sheep.

The market was quoted dearer for all descriptions in the similar yarding of lambs and larger offering of sheep. The top-priced lambs made $150 for Chinchilla producers E.L. and S.F. Beard.