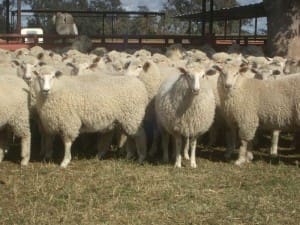 But prices for the preferred trade and heavy suckers still held at 560-632c/kg cwt, while rates for 16.1-18 kg new season lambs continued to strengthen with help from restockers.

New season offerings are starting to dominate New South Wales saleyards, with suckers making up 72 percent of the Cowra yarding on Friday, and 46pc of the lambs offered at Griffith.

AuctionsPlus sheep and lamb numbers were steady at 33,743 last week, with growing numbers of store lambs. Market operations officer Anna Adams said there were some outstanding results for breeders.

Quality young breeders were the highlight of this week’s sheep sales; future breeders and ewes with lambs, she said.

The NLRS said lamb quality was generally good, particularly for the heavy grades. Mainly trade and heavy weights were penned, including 5500 new season lambs. There were a few store lambs suitable for the restockers and all the buyers were operating except for one. Competition was a little softer, resulting in a cheaper market.

The NLRS said lamb quality was fair with a good number of well-finished lambs. Most were heavy and extra heavy weight lambs. There were 4500 new season lambs, with most fresh and well-finished. The usual buyers competed in a cheaper market.

In Victoria in the Shepparton saleyards on Friday, the agents yarded 655 lambs, 387 more than last week, and 500 sheep, 273 fewer.

The NLRS said lamb quality was mixed for the core field of late winter buyers.

The sheep were mostly ewes that sold to more varied rates, with prices a little erratic for leaner conditioned grades but steadier for the better covered trade and heavy weights. The medium weight 2 and 3 score ewes sold from $65-$100 and the heavy 3 and 4 scores made $92-$122. They mainly ranged from 320-380c/kg cwt. Heavy weight rams sold from $48-$60 with a few Merinos made $74.