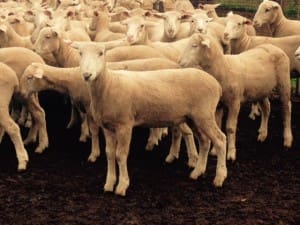 These 17.1kg cwt Poll Dorset cross lambs sold for $129.50 at Dubbo on AuctionsPlus on Tuesday.

Charles Stewart and Co auctioneer at Ballarat, Jamie McConachy, said lamb rates had stabilised over the last three weeks. He said 600c/kg cwt was becoming very common in saleyards and over the hooks.

“I think it is simply supply and demand; we are running out of numbers week by week and consequently the job is getting dearer and dearer.

“That will probably remain the trend for the next month I would imagine, before new season lambs hit the northern markets.”

Mr McConachy said the strength in the market was in the trade lamb sector, although prices of $200 a head were becoming more common.

“That is certainly a good result.”

In NSW, the NLRS said over-the-hook lamb rates moved higher this week, however the majority of processors kept their rates firm. Mutton rates were unchanged across all weight ranges.

This week’s updated over-the-hook rates for Tasmania and Western Australia were not available when this report was published.

At the Dubbo saleyards on Monday the agents yarded 11,940 lambs, 3320 fewer than last week.

The NLRS said the quality of the lambs was fair to good, with quite a few lightweight Merino lambs penned. There were fair supplies of well-finished crossbred lambs suitable to the trade and export orders. The usual buyers attended.

Demand for the limited supply of good trade weight lambs increased and lifted prices $5-$7. There was limited restocker competition on crossbred lambs. However the market trend was firm to $10 dearer. Export weight lambs sold to a dearer trend with competition from trade buyers. The market improved by $7-$10. There were dearer trends through all classes of sheep with the limited numbers creating increased competition.

The NLRS said lamb quality was also similar to that of previous sales. There were good numbers of well-finished lambs along with the plainer pens. Heavy and extra heavy weight lambs were well supplied. The usual buyers competed in a dearer market. Light lambs sold from $103-$108. Trade weights lifted $3-$5, with odd sales more. Prices ranged from $114-$148. Heavy lambs lifted $5 to sell from $143-$165. Extra heavy weights were firm to $3 dearer and sold from $155-$204. Carcase prices averaged from 582-636c/kg. Trade weight Merino lambs sold from $96-$138.

The sheep were mostly Merinos and quality was mixed. Some handy lines of heavy sheep were offered. Prices lifted, with Merino ewes selling from $78-$126. Crossbred ewes ranged from $88-$130 and Dorper ewes made $76-$99. Merino wethers sold from $82-$129.

The NLRS said lamb quality remained mixed, with a lot of lambs lacking finish and fat cover due to the dry season. All the usual buyers operated and competition was stronger, most noticeably from domestic and supermarket buyers who again pushed into heavier weights of up to about 27kg cwt to access better quality. Competition from exporter buyers on heavy lambs over about 28kg cwt was still limited.

The market was dearer by about $4-$10 across most grades of slaughter lambs. Prices reached a top of $204 for a stand-out pen of extra heavy lambs, estimated to be 34-36kg cwt with a $9 skin. The better lines of light weight lambs sold for slaughter from $90-$120. Restocker interest was selective on some of the very poor conditioned 1 score lambs which sold from $17.60-$53.

Demand for lambs suiting domestic orders was strong, with most of the better quality pens making $135-$165. On a carcase basis averages were nearing 600c/kg cwt across runs. Domestic buyers paid to $172 for lambs estimated at 27kg cwt. Heavy lambs suiting domestic orders made more on a carcase weight basis than those that sold to export companies. Most heavy lambs which sold to exporters made from $160-$188, with one pen at $204.

The mutton sale also showed a dearer trend, with Merino wethers topping at $132 and heavy crossbred ewes to $130. A line of young first-cross ewes, which had been joined to start lambing in July, sold to restockers at $118-$124.20.

The NLRS said quality over the trade weight and heavy lambs was again good. Competition was keen, with most lambs selling from firm to $5 up on last week for the better quality trade and heavy weight lambs. Domestic orders are still pushing into the higher weight categories. Extra heavy export lambs reached a market top of $205.

A generally good quality yarding of crossbred and Merino lambs sold to erratic competition by the usual local and interstate, trade and processor buyers. Merino lambs were sought after by processors and prices lifted across most categories, while feeders were occasional bidders on crossbred lambs.

Prices remained very strong, with all categories firm and lighter lambs suitable for live export, feeders and air freight processors dearer. Light store lambs to restockers made $40-$71 and were dearer. Light lambs sold close to firm to processors, live export and feeders at $75-$114. Trade lambs sold from $80-$133 to be firm to $4 dearer and average 583c/kg for the prime drafts. Heavy lambs sold to a top of $151 for lambs more than 26kg cwt with a good skin.

Mutton supplies were mixed with only moderate supplies of better conditioned ewes available. Ewe prices eased slightly with light drafts from $35-$58. The 2 score processor mutton made $62-$81 to be $5 lower and heavy ewes also sold easier at $78-$90.