Trade and heavy lamb prices ease on supply and quality 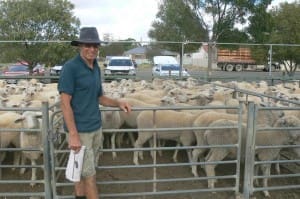 Premiums are still being paid in all slaughter lamb categories for quality, but the number of plainer secondary lambs is bringing average rates down.

Wagga agents yarded 32,000 better quality lambs on Thursday, 11,000 more than last week, and the National Livestock Reporting Service said competition was sporadic before gaining momentum due to the increased number and some lambs showing dryness.

Processing quality light and trade lambs are still generally making 440-580c/kg at most saleyards, with secondary lambs not preferred by processors or professional feeders selling below 400c/kg.

The ESDI for mutton closed on 316c/kg, up 4 cents, and the national indicator improved 3 cents to 315c/kg.

In New South Wales at the Central Tablelands Livestock Exchange at Carcoar on Wednesday, the agents yarded 8400 lambs, 2750 more than last week, and 4200 sheep, 1600 fewer than last week.

The NLRS said it was a good quality yarding, with a notable selection of heavy weight lambs and a good number of trade weights. There was also a strong selection of lighter lambs to suit the restockers.

The NLRS said quality improved across all trade lamb categories, with increased supplies of grain-fed and lucerne-finished lambs. Quality was good in the reasonable offering of heavy lambs. Light lambs suitable to restock and feed were keenly sought by northern and local buyers.

Due to the increased numbers and some lambs showing dryness, competition was sporadic before gaining momentum. Well-finished trade lambs still commanded premium prices, while dryer types were discounted a few dollars.

The very mixed quality offering of sheep included all weights and grades. Demand was solid over all weights and grades. Medium and heavy mutton sold unchanged to $5 higher. Heavy ewes made from $86-$124.20, or mostly 306-322c/kg. Trade sheep sold to spirited bidding at $70-$95.20. Plain light weight ewes were keenly sought, making $46-$68.

At the Hamilton saleyards on Wednesday, the agents yarded 9073 lambs, 362 fewer than last week.

The NLRS said lamb quality was mixed. Prime trade weights were well-supplied, but there were fewer 4 score heavy lambs and some plainer store crossbred lines. Processor competition from the usual buyers was slightly weaker, with not all operating fully and being more selective in the heavy and medium trade weights. There was a significant lift in the demand of light trade weight grades.

The market fluctuated and seemed to be a little easier at the latter stages of the sale once buyers had obtained numbers. Local restockers, along with Shepparton and Swan Hill, were competitive at times trying to fill orders.

The NLRS said it was an average quality yarding, with lambs not presenting as well as previous weeks. As a result, the usual buyers operated in a cheaper market, with trade weight and heavy lambs selling $2-$5 easier. 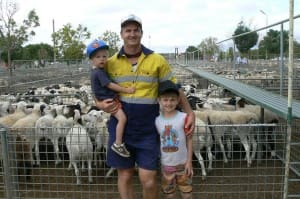 Curlwaa producer Frank Stockman and his boys sold 13 Dorper lambs for $120 at Ouyen this week.

At the Ouyen Livestock Exchange on Thursday, the agents yarded 6480 lambs and 1647 sheep.

At the Hamilton saleyards on Thursday, the agents yarded 5716 sheep.

The NLRS said the quality of the yarding was plain to good and consisted of well-covered lines of Merino wethers and ewes in all weights and grades. The usual buyers attended, but not all operating fully.

Prices remained relatively unchanged for medium weight sheep and were firm for light mutton. Heavy crossbred sheep prices came back by up to $5. More demand for Merino wethers lifted prices $9-$13. Restockers paid from $65-$94 for crossbred ewes.

In South Australia at the Mt Gambier saleyards on Wednesday, the agents yarded 666 lambs, 1678 fewer than last week, and 136 sheep, 94 more.

The NLRS said a small field of trade and processor buyers attended, but not all were active. Some restocker orders sought supplies. With the lack of numbers prices eased overall.

In Queensland at the Warwick saleyards on Wednesday the agents yarded 1665 lambs and hoggets, and 720 sheep.

Trade lambs sold cheaper for trade and the export, light trade and store drafts were firm in a smaller yarding of lambs. The top-priced lambs at the sale weighed 58.2kg lwt and made $139 for Stone Family Farming of Dirranbandi.