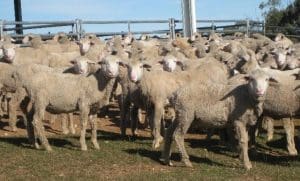 The National Livestock Reporting Service did not quote indicator changes because of the disruption of regular Monday saleyard sales in Victoria and New South Wales for the Queen’s Birthday holiday.

However, after Tuesday saleyard sales, the NLRS national and Eastern States Daily Indicators for the main light, trade and heavy slaughter lamb categories continued to improve. The ESTLI for trade lambs has lifted 7 cents since last Friday and the heavy lamb indicator rose another four cents above its 6-cent rise late last week. Only the restocker and Merino lamb category indicators dropped.

The ESTLI and national indicators for mutton both cleared 400c/kg this week, with the eastern states indicator reaching 402c/kg and the national indice rising 8 cents to 401c/kg.

The NLRS quoted over-the-hook rates for lambs as dearer in NSW this week, following the continuation of higher saleyard prices. Mutton rates remain firm. However, a ‘no quote’ is given due to some contributors not currently quoting.

In Victoria, the NLRS quoted over-the-hook lamb indicators as mostly steady week-on-week, with trade weights averaging 607c/kg cwt. There were some upward adjustments to mutton indicators, particularly for the heavy weight category.

In South Australia, the NLRS quoted over-the-hook lamb indicators as easing across all categories week-on-week, with trade weights averaging 590c/kg cwt. Mutton indicators were up an average of 13c/kg cwt overall.

AuctionsPlus reported it 38,384 sheep and lambs last week, 2994 fewer than the previous week.

The online marketer said overdue rainfall in the past month has allowed vendors more flexibility and the retention of sheep and lambs has been seen in the lower online offerings.

Merino ewes presented in solid numbers across the board in last week’s AuctionsPlus sales. Young ewes, 1-2 years-old, averaged at $131 and sold to $212.50 for 240 26-27 month-old mid-February shorn Gum Hill blood ewes at Spalding in South Australia. The 53.4kg lwt score 1 and 2 ewes were scanned 100 percent in lamb to Border Leicester rams.

The NLRS said the supplementary-fed lambs were generally well-presented. Mainly heavy weights were penned, while the trade and store lamb supplies were limited. All the usual buyers operated and competition was good, resulting in a dearer sale.

The NLRS said lamb quality was similar to previous sales, with a good number of grain-assisted lines. Most were heavy and extra heavy lambs. The usual buyers competed in the slightly better market.

The NLRS said lamb quality was generally good. The supplementary-fed lambs showed plenty of finish, but there were some plainer lines. Mainly heavy and extra heavy lambs were offered, with a good supply of trade, store and Merino lambs. Competition was solid from the usual buyers, resulting in only a slightly easier market. Light lambs sold to the processors fell $4 and averaged $111, while stores averaged $90.60. Medium and heavy trade weights were firm to $5 cheaper and made 590-634c/kg. Most heavy trade weights sold from $125-$150. Heavy weight lambs were $2-$6 cheaper at around 590-620c/kg. A fair run of extra heavy weight lambs sold from $190 to a top of $216. Merino lambs sold from $138-$170.

The NLRS said the usual buyers were offered a plain to very good quality yarding of lambs in all weights ranges.

There were eight pens of quality extra heavy lambs that made over $200, with the best selling to $223. Heavier trade weights were keenly sought and sold from $142.50-$172, averaging around 650c/kg cwt.

At the South Australian Livestock Exchange at Dublin on Tuesday, the agents yarded 6561 lambs, 2439 fewer than last week, and 892 sheep, 108 less.

The NLRS said the generally very good quality yarding of crossbred and Merino lambs sold to softening demand from the usual trade and processor buyers, though there was no supermarket interest. Feeders and restockers were cautiously active on late 2015-drop crossbred lambs and full wool Merino lambs attracted some solid bidding.

The NLRS said more trade and processor buyers, and some restockers, were active on the very mixed quality penning.

The NLRS said the improved quality yarding had more good lines of well-conditioned sheep, air freight and trade lambs. All the usual trade buyers were active and the market jumped considerably.

The NLRS said after the very rough weather and major flooding, markets were back to normal at Powranna and Killafaddy on Tuesday, with agents yarding 1300 lambs, 900 more than last week, and 1500 sheep, 1450 more.