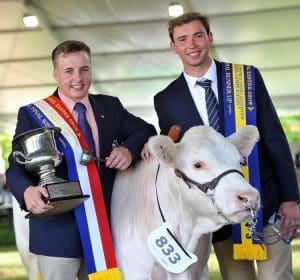 TOP young auctioneers competing in the New South Wales and national competitions in Sydney next month have been named.

The young auctioneers from around the country will travel to Sydney to compete in the 2018 Australian Livestock & Property Agents Association (ALPA) NSW & national Young Auctioneers Competitions on Friday March 23.

In the 28th year of the ALPA national competition, eight national finalists will compete for the Prosser Cup. The winner will go on to represent Australia for an opportunity of a lifetime in the International Livestock Auctioneers Competition at the Calgary Stampede, Canada. Reigning champions Queensland will also have to defend their title for the NAB Agribusiness Team Shield. The shield is awarded to the state with the highest combined point score.

The day will begin at midday in the Big Top Amphitheatre at the Sydney Royal Easter Show. New South Wales Minister for Primary Industries, Minister for Regional Water, and Minister for Trade and Industry, Niall Blair, will open the event.

ALPA said the auctioneers competitions are a culmination of the hard work put in by Australia’s young auctioneers, including enrolling in ALPA’s auctioneering schools and practicing at their local saleyards.

ALPA chief executive officer, Andy Madigan, said the knowledge and skills the young auctioneers bring to the competitions is outstanding.

“Their professionalism reflects the training and education that ALPA provides across Australia.”

The competitors are assessed on their diction, values, voice and manner by three experienced auctioneers.

On the night before the competitions, ALPA members, industry members and the competitor’s friends and family will gather for the annual ALPA NSW & National Young Auctioneers Competitions dinner. A highlight of the night will be the charity auction, conducted by the 2017 National Young Auctioneers Competition winner, Lincoln McKinlay. This year ALPA will be raising funds to support the work of Legacy Australia, a charity dedicated to caring for the families of our incapacitated and deceased veterans.

The competitions will be livestreamed, with links advertised shortly.