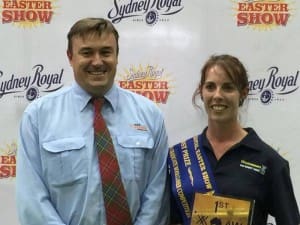 Her success against nine other graduates gave the Western Institute of Tafe its second consecutive win in the competition, as former student Gabby Saliba, won both the national and state awards last year.

Second place in the competition was taken by Riverina Institute of Tafe graduate Ayla Young of Leeton and third was won by Hunter Institute of Tafe’s Chris Hvass from Rylestone, NSW. TAFE Western’s second representative this year Suzie Carlon, from Lyndhurst, finished fourth.

For the first time the competition field an entrant from South Australia in Tess Riley from Kangaroo Island.

TAFE Western woolclassing and agriculture teacher Frank Roberts, was presented with the Dennis Teasdale Perpetual Trophy as the teacher of the winning graduate wool classer.

He said Audra’s commitment to study and her practical and theory work was outstanding, and it’s very rare for someone so young to be so industry savvy.

“She has shown maturity and skills that are well beyond her years.

“The win was very much deserved and recognition for the hard work she puts in,” he said.

“Her classing jobs were of a very, very high standard and both her AWEX ID and value exercises were some of the highest scores produced, which ultimately led to her winning both the national and state awards,” he said.

“That’s where she shone and she had a convincing discussion about her classing strategy.”

The competition judges AWEX wool services manager David Cother, Australian Wool Network’s Brett Cooper and John Mills from TAFE NSW said the value of the competition was as an opportunity for the top students to showcase their talents.

Mr Cooper said Audra presented herself and the wool well and it was evident that she had a very sound understanding of wool classing and this was a reflection of her commitment to her training. It all graduates had skills that would hold them in good stead for a future in the wool industry, the judges said.