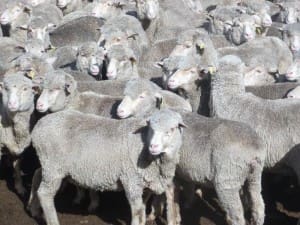 These 1-2 year-old January shorn Merino ewes, scanned in lamb to the White Suffolk, sold for $120 at Boorowa on AuctionsPlus this week.

TOP quality trade lambs sold for more than 650c/kg at Wagga this week, with 22kg cwt lines making to 668c/kg, according to the National Livestock Reporting Service.

Elders Wagga auctioneer Joe Wilks said the lamb job held up well this week, with several pens of trade lambs making 645-650c/kg and select pens that “fitted right in the slot” might have made over 650c/kg with the strong domestic competition.

He said most of the trade lambs made over 600c/kg in Wagga, reflecting the quality of the yarding.

“From our trade lambs right through to our heavy exports we had a solid yarding.”

He agreed the prices paid were not necessarily an overall lift in the market, but reflected processors taking the opportunity to purchase quality lines.

“It hasn’t lifted, it has just stayed strong and the better quality lambs are getting rewarded.

Mr Wilks said there were still more good old lambs to come in and he was starting to get calls from producers wanting him to look at suckers.

“I just feel it is just a fraction early yet and they are trying to rush it to get this big money.”

Wagga would be among the first markets to yard new season’s sucker lambs in the next 3-4 weeks, he said.

“It will only just start then, there won’t be big numbers, but there will be blokes putting their foot in the water to test the market.”

Some early 2015-drop lambs were sold at Goulburn this week, 17kg cwt lambs that made $111, but numbers of true suckers were not expected in the saleyard for another four weeks. With the late start to the season, Elders Goulburn agent Cameron Townsend said he didn’t expect the weight would be in Goulburn’s early suckers this year.

The ESDI for mutton closed up 2 cents to 395c/kg and the national indice lifted similarly to 394c/kg.

In NSW at the Central Tablelands Livestock Exchange at Carcoar on Wednesday, the agent yarded 9600 lambs, 650 fewer than last week, and 3500 sheep, 500 more.

The NLRS said quality across the trade and heavy lamb categories was mixed, with the bulk of the well-finished lambs supplementary fed or crop finished. Extra heavy lambs were in shorter supply and lacked the weight of the previous sale. Buying trends across heavy trade weight category fluctuated according to quality and skin length. The usual export and domestic buyers attended, along with limited restocker activity.

Bidding was stronger for the better finished neat-shaped trade lambs, with prices up to 668c/kg. However, most sales regularly averaged 605c/kg cwt. The well-finished second cross trade lambs, 22-24kg cwt, made from $145-$161.

Well-covered Merino trade lamb prices were quite variable at times, subject to skin length. The better finished Merino trade lambs made from $122-$144.20. Light weight secondary lambs sold to steady demand from processors, with prices generally unchanged to $3 dearer, from $72-$116. Well-bred secondary lambs to turn out were in short supply, with a single pen reaching a top price of $109. Heavy lambs were well-represented, while extra heavy lambs were in shorter supply, with quality not the standard of the previous sale.

Mutton quality was quite good, with most of the offering being heavy and medium weight sheep with minimum skin value. The usual buyers operated. Medium weight Merino and crossbred ewes sold $3 dearer, to average 448c/kg cwt. Heavy sheep sold to weaker demand, with prices easing $8-$9 to average 400-436c/kg. Several drafts of excellent heavy wethers sold to steady competition to reach a top price of $134. The limited numbers of plainer sheep made from $42-$78.

The NLRS said the mixed lamb offering included a few lines of longer wool young lambs in a yarding of mostly light and trade weights, plus some well-finished heavy and extra heavy weights. Suitable store lambs were limited in supply. Most of the usual orders operated in a mixed market.

The mutton selection was mixed, but included some well-finished Merino ewes and wethers, along with the usual plainer light weights. Prices eased by $2-$4 on average and a little more for over-conditioned heavy weights. Light 2 score ewes made $42-$74, with medium and heavy weights from $56-$100 for most, to average 270-320c/kg cwt. Wethers ranged from $70-$110, to average around 360c/kg.

The NLRS said quality was very mixed, especially in the sheep, with more light weight 1 and 2 scores appearing. Most of the regular buyers attended, with one less domestic processor again absent in the sale and one heavy sheep buyer not present. Restocker activity was limited due to a lift in the sale. Demand, however, remained steady for the light 2 score light trade and medium trade lambs, as these sold $3-$5 dearer, while the heavier trade and export type 4 score lambs sold from unchanged to $4 cheaper. Light 2 score lambs sold from $63-$106 and the medium trade to heavy trade 3 and 4 score lambs sold from $117-$145, averaging around 610c/kg cwt. The heaviest 4 score lambs made from $147-$164, with an estimated averaged of 585c/kg. Light 1 and 2 score sheep sold from $45-$71, with medium mutton selling from $69-$92 and the best crossbred 4 score ewes making $100-$115, or an estimated average of 380c/kg. Only light 1 and 2 score Merino wethers were penned, with the best making from $64-$71.

The NLRS said lamb quality was average, with most of the regular buyers operating in a firm to dearer lamb market.

The NLRS said a small field of trade and processor buyers were present, but not all were active. Prices were generally firm across the market.

The NLRS said it was a very mixed quality yarding. Store drafts were in abundance as the dry weather continues. There was less competition, with one processor closed for maintenance and no live export interest, resulting in cheaper prices. Prices for small store wethers held up well, while ewes were hard to sell. Light store lambs sold from $20-$89, to average $55. Air freight lambs sold from $38-$100, to average $88. Crossbred trade weight lambs were cheaper, making from $50-$120. Trade weight Merino lambs sold for $104. Merino lambs sold to restockers for $20-$90. Heavy lambs over 22kg eased slightly, with the top price $140.