Top shorn lambs in demand as prices adjust around quality 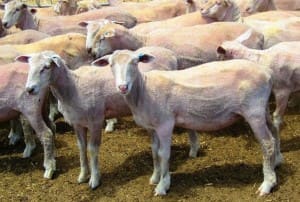 SLAUGHTER lamb prices equalised around quality between the eastern states mid-week with top shorn lambs in strong demand in some Victorian saleyards and making over 560c/kg.

Restocking demand continued in all saleyards, but was strongest in Victoria.

The NLRS Eastern States Daily Indicators for lambs generally lost ground, except in the heavy category. After Tuesday’s saleyard sales, the ESDIs for lambs were: restocker 511c/kg, down 11 cents; Merino 414c/kg, down 20c; light 483c/kg, down 5c; trade 508c/kg, down 1c; heavy 524c/kg, no change. The national trade lamb indicator lost 1 cent to 509c/kg and the heavy indice closed firm on 525c/kg.

Mutton prices were generally down nationally except where restockers underpinned values, with NLRS reporters quoting many processors as having a backlog of supplies on hand. The ESDI for mutton lost 12 cents on Tuesday to close on 367c/kg and the national mutton indicator fell 13 cents to 265c/kg.

NLRS over the hook lamb rates fall in NSW, lift in Vic and SA

In NSW, the NLRS said trade and heavy weight lamb over-the hook lamb categories declined up to 6c/kg cwt on average this week, , while light weight and Merino lambs were steady. There were no movements to mutton over-the-hook indicators week-on-week, with medium weights averaging 310c/kg cwt.

In Victoria, the NLRS said over-the-hook lamb indicators were dearer across most categories this week, with trade weights averaging 523c/kg cwt. Mutton indicators were lower than last week’s levels, with medium and heavy weights down an average of 10c/kg cwt.

The NLRS said very few new season lambs were yarded, with most of yarding being trade and heavy weights, along with a fair percentage of lighter weights.

The good quality yarding of sheep included a good selection of prime Merino ewes and heavy weight crossbreds. The market was tough, with most grades falling $11-$16. The 2 score ewes sold to processors made $8-$56. The 3 and 4 score Merino ewes made $40-$88 and crossbreds sold to $84. Ewes sold to restockers at $25-$50 and Merino wethers sold to $86.

The NLRS said the quality of the lambs was very mixed, there was a good supply of second cross trade weights. There were a few well-finished heavy weights, some secondary quality lines and restocker lambs. The usual buyers attended.

Demand for trade and heavy weight lambs was weaker leading into Christmas when traditionally other meat products are consumed. This resulted in cheaper trends, with trade weight young lambs averaging $11-$15 easier. There was some restocker competition for well-bred first and second cross lambs, with the market firm to cheaper. Heavy lambs also met with weaker demand, but were less affected than trade weights, which were $4-$6 cheaper. Secondary quality lambs sold to a cheaper trend, while lean Merino lambs were dearer.

Demand for medium and heavy sheep was also weaker, with market trends cheaper for both ewes and wethers. There was fair demand for the lean light weights.

The NLRS said lamb quality continued to be mixed, with a good number of well-finished shorn lambs and some plainer types yarded. Most of the usual buyers competed in a cheaper market.

Mutton quality was again very mixed in the mainly Merino yarding. Prices were cheaper, with Merino ewes selling from $53-$75. Crossbred ewes ranged from $49-$73 and Dorper ewes sold from $50-$65. Merino wethers made $67-$88.

The NLRS said quality was best in the shorn lambs, with most longer-woolled young lambs displaying dryness. A full field of buyers competed for heavy trade and the quality of the export lambs over about 24kg cwt was the strongest seen at this centre for some time. The best shorn lambs sold to exporters and domestic processors averaged $8-$10 dearer, with some pens making as much as $20 more than a week ago. Bidding for the general run of domestic slaughter lambs was more selective, but most sales still gained $3-$6. Store lamb competition fluctuated, with some of the bigger lines noticeably dearer but other pens just similar. The market reached a top of $165.60 for a small pen of extra heavy export lambs estimated at over 34kg cwt. Competition for the best presented heavy lambs was animated. A highlight of the sale was 24-27kg cwt shorn lambs selling from $138-$152. On a carcase basis these quality lambs, which had little to no skin value, were estimated to have sold mostly from 530-560c/kg cwt, with a few select pens nudging 600c/kg. The general run of trade lambs, around 20-22kg, mostly sold from $105-$125. Store lamb competition remained strong with orders from Swan Hill, Horsham, Kerang, Wycheproof, Birchip, Shepparton, Echuca and the local Bendigo area.

Demand was much weaker for the sheep amid reports many processors have a backlog of mutton heading into Christmas. Not all the usual export orders operated. Most sheep were $10-$18 lower than a week ago. The market reached a top of $100.20 for young crossbred ewes sold to restockers. However, most slaughter sheep sold for less than $80, with the plainest and lightest down to just $8. On a carcase basis, the best presented trade mutton sold mostly from 260-280c/kg, with the general run of ewes returning an estimated 225-240c/kg.

At the Hamilton saleyards on Monday, the agents yarded 23,673 lambs, 4246 fewer than last week.

The NLRS said it was mixed quality yarding, as more lambs from southern districts were offered compared to last week. There were more lambs in better condition and suitable for slaughter, and plentiful supplies of 2 and 3 score trade weights. A near-full field of processors was keen to fill orders and there were also restockers from the Goulburn Valley, Wimmera, South Australia and local regions.

The NLRS said lamb quality was average to good, with good supplies of light weight, trade weight and heavy lambs. The usual buyers operated keenly in a generally dearer market for trade and heavy weight lambs.

The sheep yarding included all weights and grades. Several big runs of well-presented crossbred and Merino ewes were offered, with most categories selling to an easier trend. Overall, sheep sold $5-$15 cheaper than last week, with most works reporting higher offerings. The bulk of the crossbred ewes were purchased by local restockers for $50-$73. Merino ewes sold to restockers for $52-$65 and Merino wethers made $53-$89. Light weight 1 and 2 score sheep sold from $19-$54. Medium weight 2 and 3 score sheep sold from $33-$80 and ranged from 165-290c/kg cwt. Merino mutton averaged 270c/kg. Heavy 3-5 score sheep sold from $50-$78. Heavy Merino wethers made $68-$79 and medium weights sold from $50-$75.

The NLRS said the very mixed quality yarding sold to fluctuating competition from a large gallery of trade and processor buyers.

The generally good quality sheep yarding sold to solid competition from a larger gallery of processor buyers. The large restocker contingent from the Eyre and Yorke Peninsulas and Mid-north provided a solid base, and were intent on purchasing heavy weight ewes and wethers or any sheep with longer wool. Restockers paid $53-$73 for light weight ewes and $72-$92 for heavy weight Merino ewes. Crossbred ewes sold to restockers for up to $65 and wethers made $75-$97. Light weight 2 score ewes sold processors eased $7 to $45-$68, averaging 225c/kg cwt. Heavy weight 3 scores remained unchanged at $63-$103, averaging 259c/kg Heavy weight wethers followed suit, selling from $80-$109 to average 322c/kg cwt. Heavy weight rams made $30-$60.

The NLRS said the lambs yarded were mostly store quality. The usual trade and processor buyers attended and competition from restockers was strong.

The NLRS most of the lambs were crossbreds, but a large number of light weight Merino lambs was also consigned. Quality was mixed with reasonable supplies of prime lambs All the usual buyers operated.

There were good numbers of heavier weight ewes carrying reasonable length fleeces. Prices lifted for the better drafts. Supplies of lighter weight lines exceeded demand and prices eased slightly. Light ewes sold from $15-$54 to be $4 easier. The 2 score processor drafts made $35-$68, to be firm. Heavier weight and better conditioned drafts with fleeces lifted $2 to $55-$85 and bare shorn lines made $55-$72. Restockers were strong on lighter conditioned ewes, paying close to $6 more at $25-$56. Better ewes sold to restockers included some well grown long wool ewe hoggets that made $54-$102.50, mostly firm to $13 dearer. Wether prices remained firm, with the export wethers making $85-$98 and feeders paying from $75-$114, depending on frame and wool length. Ram prices were similar, with ram lambs selling to $126.50 and feeder drafts from $40-$70. Old rams sold to processors for $5-$45.

For the 2015-16 season’s last and next sale dates for MLA’s NLRS reported saleyards click here.