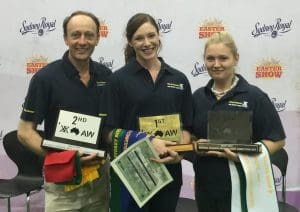 A BREAK from tertiary study has started Georgia Reeves’ career in wool and helped her win the nation’s top wool classer graduate competition.

“It’s pretty amazing to get chosen.”

Georgia was the first student of TAFE NSW Riverina Institute trainer Jenni Turner to get into the competition. NSW TAFE Wagga and Jenni Turner received the Dennis Teasdale Perpetual Trophy awarded to the training organisation and trainer of the competition winner.

“She was my first graduate to compete and I am absolutely delighted for her,” Jenni said.

“I think the wool industry should be grateful that we have intelligent young women who like wool.”

Georgia has only been working full-time in wool sheds for three years after deciding to return home to take a break from a natural medicine course, following a year studying Fine Arts (visual).

“I was studying in Melbourne and it was a long course and I thought I should go home, do a bit of travelling and get a bit of life experience before I commit to the course

“When I came home I didn’t really know what I wanted to do – I had never worked in the sheds before,” she said.

“I was still trying to work it all out.”

Georgia decided to do a couple of week’s work in her step-dad’s wool shed at his Daysdale farm during shearing to earn some money.

“I sort of fell in love with and I haven’t turned back since so it is pretty funny that I was in Melbourne for four years and now I’m working in sheds all over Australia.”

Georgia is sure her future is in wool.

“I couldn’t turn back now; I’m just too passionate about it.

“I didn’t really know much about the industry and all the opportunities before I started rousabouting; it’s been a big eye-opener,” she said.

“I don’t think I could live in the city again.”

Georgia said her contractor Kelvin Kuhne had supported her by encouraging her to class clips with him watching over her. She said it was a great experience to start her training at TAFE in Wagga Wagga under trainer Rob Harris, but switched to NSW TAFE’s Riverina Institute location at Walla Walla near Culcairn after eight months to cut her travelling time from her home.

“Rob’s got a lot of marketing knowledge and has been teaching the course for a long time, whereas Jenni has a lot of sheep experience and is also a wool broker (with Fox and Lillie Rural at Culcairn).

“So I think it was probably a combination of the two that got me to where I am today.”

“He has sort of been my mentor.

“He has watched over everything I’ve done, taken me to wool sales and really been so supportive – just a brilliant bloke.”

Georgia has said she is planning on working in as many different sheds, in as many different locations as she possibly can. She also wants to learn more about the marketing and processing elements of the industry, but above all her aim is to perfect the art of classing wool.

“There is still so much I have to learn.”

Jenni Turner said she was extremely proud and there were a lot of young people in the Culcairn, Albury, Corowa, Holbrook, Griffith and Wagga areas and in northern Victoria, that were passionate about wool.

“I feel very lucky to be a wool classer trainer and wool rep in this area, because I’ve got great passionate young people who are all hugely keen to learn.

“We hear about a lot of woes in the wool and shearing industry, but we just don’t have them here.”

Alan Smith grew up in Gilgandra on his family’s mixed Merino and cattle operation. After 13 years away Alan has returned home and increased the sheep numbers, confident in the future of wool and of farming. He is continuing to diversify and invest in livestock and tropical pastures. Alan completed his wool classing ticket at the end of 2016 as part of his family’s farming succession process. His trainer was Kerri Capill at TAFE Western’s Dubbo campus.

Casey Patterson had been a wool handler for 15 years before completing his wool classing course at TAFE Tasmania under trainer Evelyn Archer.

Sixth classer competition “the most even”

AWEX chief executive officer Mark Grave said the 6th running of the national competition and was the most even to date in terms of high level skills across multiple disciplines.

“Every year the calibre of the wool classers is lifting which can only be great for the industry.”

All finalists completed the tasks of classing crossbred, medium merino and fine Merino wool as well as exercises in AWEX-ID, valuation and an oral presentation to the judges.

Mr Grave said Georgia demonstrated her all-round ability to class wool and perform under the unique pressured environment of the competition.

“Each year TAFE organisations are asked to nominate their best graduate from the previous year.

“To be nominated is an honour that has been earned and they are to be congratulated on achieving this recognition,” he said.

“Each competitor gains valuable experience and feedback on how to improve their skills and apply them as they progress through the wool industry.”

The judges of this year’s competition were Australian Wool Network central and western NSW regional manager Brett Cooper, NSW TAFE industry liaison manager John Mills, and AWEX wool classer registrar Fiona Raleigh. The aim of the competition is to recognize excellence in wool classing and education and to lift wool classing’s profile as a profession and career opportunity.

Mr Grave said the national competition is the pinnacle competition for graduates and has created additional enthusiasm and profile for wool and the skills of wool classing.

The competition is also supported by the Royal Agricultural Society of NSW and by NSW TAFE, which helped AWEX develop it from a state-based to national event.