Australia’s supreme Merino ewe will be judged for the first time at Hamilton’s Sheepvention expo next week. 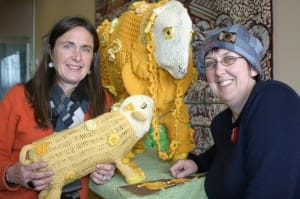 About 1000 sheep will be shown at the city’s showgrounds during the two-day expo on August 4 and 5, organised by the Hamilton Pastoral and Agricultural Society.

Society chairman Rob Hartwich said the $1000 prize for the winner of the new class had attracted interest from Merino breeders, but it was hoped the title would eventually be regarded with equal importance as Dubbo’s Supreme Australian Merino Ram of the Year event.

The Merino is the feature breed of Sheepvention, with about 170 sheep from 25 studs entered.

About 390 Merino rams will also be sold in the annual sale on August 5, including sheep from six new stud vendors.

Pre-Sheepvention events started this week with the launching of the Woolly West Fest and the “unlocking” of a flock of wool-crafted sheep in the city’s art gallery. Lead artist for the ‘Green Sheep’ project, Jacinta Wareham, said more than 300 people from eight Southern Grampians shire towns made the sheep, with materials funded by Regional Arts Victoria and Australian Wool Innovation.

A People’s Choice award will go to the Supreme Champion Sheep after judging at the art gallery till Sunday and at Sheepvention on Monday.

“This is adult’s having fun,” Ms Wareham said.

After Sheepvention, the ‘flock’ will be dispersed to their town of origin before returning to the showgrounds.

“Their diaries are filling up quickly – they are not going to get dusty.

“They will be busy sheep,” she said.

“It is a testament to the community spirit here in our shire, it has created a buzz in the towns and is a great lead-in to Sheepvention.

“I think we are all just feeling the woolly love,” Ms Wareham said.

Other features at Sheepvention include the popular inventions competition, which this year has attracted increased student entries.

The popular fashion parade will feature entries from the Australasian Young Designers Award, with winners announced in Hamilton next Sunday night.

Sheepvention will be opened by Victorian Premier Denis Napthine on August 4.