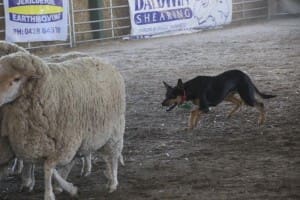 KELPIES sold to $7000 at the 2016 Jerilderie Working Dog Auction at the weekend.

Buyers came to Sunday’s auction at the Jerilderie Racecourse from most areas of Victoria, New South Wales, South Australia and Western Australia, but co-organiser Andrew Rutherford said the auction was “a little bit tougher than we expected it would be”. Many of the auction’s buyers have traditionally come from Victoria, but the state has suffered from extremely dry conditions, he said.