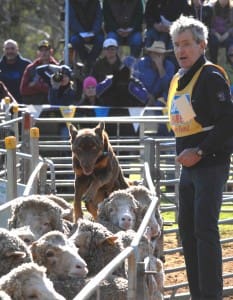 Walcha mixed farmers Angus and Lisa Kirton reinvested in Hamilton breeder Ian O’Connell’s training to pay $11,000 for 20-month-old red and tan Kelpie Bagalla Bart, helping to push the auction gross to a record $220,650 for a total clearance of 62 dogs.

Casterton Kelpie Association president Karen Stephens said the record auction result – the first time the gross has exceeded $200,000 — was testament to the quality of dogs being offered at Casterton and the huge community effort behind the auction and weekend festival.

This year 62 dogs averaged $3559 in the auction, almost $500 more than the 2014 average of $3067 for 58 dogs sold. Three dogs made more than $9000 in the 2015 auction, reflecting the quality of, and strong demand for, trained dogs in the catalogue, according to RMA auctioneers James Tierney and Bernie Grant.

In 2009 the Kirtons paid $6100 for another Ian O’Connell-trained dog, Saltpan Grumpy, but he recently had to be put down recently due to a brain tumour.

“I know Ian trains his dogs exceptionally well and obviously had a fantastic experience with Grumpy.

“I needed a trained started dog now so that’s why I shelled out what we did,” Mr Kirton said.

The Kirton’s run 6000-7000 sheep in a superfine wool and first cross ewe breeding operation on about 1900 hectares near Walcha NSW. They also background cattle, but only use their Kelpies on the sheep.

“Grumpy paid for himself easily in service fees in the first few years, so he never owed me a cent and he has given me a cracking working dog in Brownie (by Grumpy), but Brownie needs a bit of leadership.

“But when Grumpy left there was that void that needed to be filled,” he said.

“It’s like any bit of equipment, you’ve got to get the best bit of gear you can get and I’m pretty sure Bart will fit that bill.” 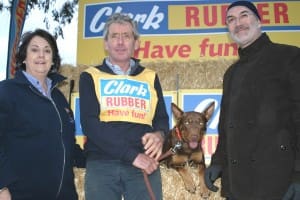 Ian O’Connell said Bart was a good honest “stock mover” that loved his work and was very biddable.

“He had all the required traits to make him a really nice dog to handle, teach and to work.” 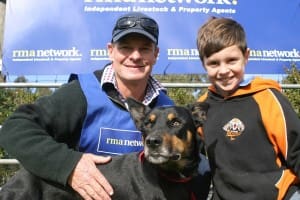 In the RMA Working Dog Auction Futurity on Saturday, NSW breeder Andrew Kennedy returned with the dog he sold for $9000 in 2013 to Peter and Beth Sandral, AKennedys Choker, to win with 242 points.

The $8000 RMA Working Dog Futurity trial in the town’s main street, involves dogs sold in previous auctions competing around a typical yard dog course for the first prize of $4000 to the owner. Second place gets $2000 and third place $1000. The original vendor of the winning dog also receives $1000.

Livestock contractor Travis Scott and Chevy was second in the 2015 futurity with 225 points and Monte Warren and Steph in their first trial were third with 132 points. Judge Peter Allan from Tasmania said Choker cast around, lifted and moved his sheep calmly without upsetting them and was always on “good terms” with his sheep.

Andrew Kennedy said Choker was an “all-round, classy dog.” He was used on stock trucks and as a sire.

“He’s got eye and plenty of walk-up strength, but he keeps them calm.

“He will back when you want him to back happily and he’s got that persuasive bark when you need it.”

The winner of the Stockman’s Challenge was first time entrant, Michael Hiscock from Maffra, a two-time winner of campdrafting’s Melbourne Cup, the Warwick Gold Cup. He was riding Mewburn Bewick and working with a Scoriochre-bred Kelpie Phoebe. Mr Hiscock said he came to the event with Phoebe’s breeder Graham Rozinski in honour of former friend and winner Dennis Neal, whom he trialled dogs with in Gippsland.

“I have always wanted to come to Casterton; it’s a great event, we will come back next year.”

In the main festival events on Saturday, Sally Henderson’s dog Jett ran the Kelpie Dash course in the fastest time of 5.31 seconds; Tegan Eagle’s Bailey won the Kelpie High Jump with a leap of 2.55 metres and the Hill Climb was won by Jodie Dowling’s River. The Kelpie Triathlon was won by Ian Roberts’ Nudge. Best entry in the street parade came from the Casterton Hospital, followed by the Casterton Playgroup and the Casterton Flower Club.