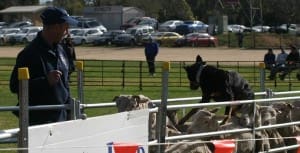 Championships convenor Ian O’Connell said the competition at Hamilton’s showgrounds has attracted some of its biggest entries, with 42 competitors in the Jurox Open Farm Dog Trial on August 3, including 14 dogs that have pre-qualified for the championship by winning open events in the past 12 months.

Mr Spicer won the championship last year with his Go Getta Package and he will compete against several other past winners of the championships, including Mr O’Connell, Mr Sharrock, Mr Rains, Paul Pierce, Rob Macklin, Rex Hocking, and Lyndon Cooper.

“No one has won it twice, but there are several in it that have won it once.

The first Sheepvention yard dog event, the Australian Stockyard Company novice competition starts at 9:30am on August 2 due to the high number of entries – 45 dogs. The Cervus Encourage Farm Dog event starts at 11.30am on August 3 and has 14 entries.

As well the pre-qualified dogs, the final championship field to compete on August 4 from 7.30am will include the top 14 scoring (unqualified) dogs in the open event.

Drones, inventions and auctioneers to feature

South West TAFE and Australian UAV Drones in Agriculture will also do a drone demonstration at 11:30am on August 4. The TAFE college will also run the Coles Taste of the Great South West marque butchery and cookery demonstrations.

Other features at Sheepvention will be the Agri-Tech Inventions display, with awards presentation on August 3 at 2.30pm and the Young Auctioneer competition at 3pm.