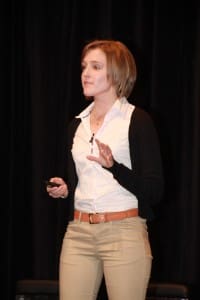 “Technology is a bit of a buzz word. It doesn’t always work for us, and makes us think of all kinds of gadgets and devices,” said Joanna who is currently completing her PhD at the University of New England.

Joanna said technology is the application of new or improved scientific knowledge.

“The LambEx committee set me challenge – to identify my five favourite pieces of lamb industry technology guaranteed to save time and labour on-farm,” she said.

Here are Jo’s top five technologies that are available to be used on-farm:

“We all know that a day in the yards can be physically demanding,” said Joanna.

Jo said the for that reason sheep handling equipment made up two of her top five, for the opportunity it offers to save time in the yards, reduce the number of people needed for yard work and also to reduce the physicality of yard work.

Jo said that the working dog is not a new technology and she was surprised to learn that the average working dog contributes over $40,000 worth of labour in its lifetime and that there is research underway at Sydney University that she finds interesting.

“The research team is now looking at ways to measure key behavioural traits and develop estimated breeding values to be used when selecting working dogs,” she said.

“The smart phone has change the way that we access information, communicate and network with one another, and I believe, is one of the most underutilised technologies at our disposal,”said Joanna.

Jo said that after six months, and losing count of the number of apps she has download and tested, she has come up with her favourites.

First on Jo’s list was the new MLA market reporting app, she said it is an easy, mobile friendly, way to access the latest MLA reports.

Second is the Lifetime Ewe Management app. Jo said its still in the prototype stage but she is excited by it.

“Farmware is pretty much everything you need to know about your farm in your pocket. Its paddocks, its stocks, its stocking rate, it’s a chemical inventory, it stores your withholding periods, your daily planner and your history,” she said.

Joanna Newton’s PhD research, on early reproductive performance in ewes, is funded by an Australian Postgraduate Award, topped up with funding from MLA.