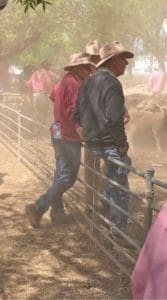 The plan by Urban Enterprise consultants said there is a large number of saleyards in southern NSW and northern Victoria and given the growing number of selling methods that are available to producers, there is a potential oversupply of saleyard facilities within a 200 – 250 km radius of Deniliquin.

This is particularly the case due to modern transport methods, which allow large trucks to productively and efficiently transport a greater volume of stock over longer distances, the consultants said.

However, despite the large concentration of saleyards in the region, the consultants found the sheep saleyards is attractive to buyers due to its location, a high quality reputation for price, presentation and quality of infrastructure and assets, and unique tree coverage over the yards.

Annual sheep throughput at the Deniliquin saleyards has been consistent over the past five years, with a minor increase in recent years.

On average, the Deniliquin saleyards accommodates the sale of 190,000 sheep sales and 6500 cattle sales annually. Sheep sales have been relatively consistent, with an upward trend in 2018 and 2019; recording sales in excess of 215,000.

However, cattle sales at Deniliquin have been declining consistently, with a total decline of more than 7000 head of cattle between 2015 and 2019 – down 66 percent. The decline in cattle throughput across the region is also likely to be caused by the lower availability of water, which is impacting pasture, the consultants said.

Edward River Council has previously resolved to divest and close the cattle yards, and re-invest into the sheep yards and ancillary facilities.

Edward River Council general manager Phil Stone said last week that councillors are committed to continuing the consultation with local stakeholders regarding the decision to reinvest in the sheep saleyards and divest of the under used cattle yards.

“In February we hosted a meeting with stock agents and farmers to explain the basis of the decision by Council.

“At that meeting we advised a final draft saleyards strategy report was under development by Urban Enterprises, the consulting firm who conducted the original consultation on Council’s behalf.”

Mr Stone said the report backs the decision of the council, based on a significant reduction in cattle sales in Deniliquin and increased competition at nearby selling centres.

“Sadly, cattle numbers don’t appear what they used to be – the demand for a weekly cattle sale in Deniliquin has not been there for many years.

“Even the planned fortnightly sales are sometimes cancelled due to low numbers.”

Mr. Stone said council remained committed to improving the Deniliquin sheep saleyards and would continue to work with the livestock industry to ensure Deniliquin remains a popular and well supported selling centre for sheep.