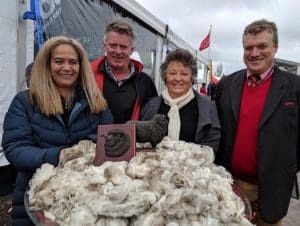 THE Hayes family were justly rewarded for what could be the final clip from their Dunkeld property Balintore this week.

They’ve bred superfine Merinos on the property for three generations, and won the Elders Southern Clip of the year at the 40th Sheepvention in Hamilton, Victoria, this week.

Convenor of the award Sam Wan said Peter and Lindy Haye’s clip had scored well over the past couple of years, but this year it was “outstanding”.

“It attracted the trade’s attention visually and then backed it up with exceptional measurements,” she said.

“The fleece bales from this clip averaged 17.4 micron, 74.3 per cent yield, 0.7 percent vegetable matter and 40 newtons per kilotex.

“The preparation of the skirtings and oddments were exceptional.”

The award was accepted by Peter’s mother Gill and brother Geoff, who said after years of dedication to wool production, Balintore was on the market.

“It has taken a lot of perseverance and passion by Peter to get here,” Geoff said.

“And an amazing long time to achieve current prices.”

While the award winning bale had sold for about $3200 in April, Gill recalls selling wool for 540 pence a pound in 1965 – the year Peter was born – which was a then Australian record, she believes.

“They were the heydays, everyone went to the wool sale and threw parties if you got the top price,” she said.

Based on pure Saxon-blood, the 6000 adult Merinos now running at Balintore are based primarily on bloodlines from within the flock, with infusions of Pooginook, Petali and Mountain Dam in recent years.

Classer Judith Ratana said the Balintore clip stood out for softness, brightness, and consistency of both micron and length.

She said a lot of care and effort was taken with the flock, and Peter was always involved in the wool preparation.