There’s money to be made in treating ewe lambs differently 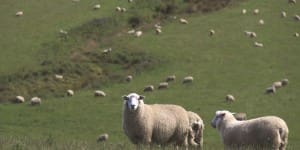 NZ sheep producers have found they can make more money by managing and marketing female and male lambs differently.

An on-farm trial involving 15 top-performing North Island farmers found that when it comes to finishing and processing lambs, there is money to be made in treating male and female lambs differently.

The farmers, who supply lambs to Progressive Meats, used Beef + Lamb New Zealand farmer-initiated technology transfer funding to analyse the records for 42,000 lambs across two seasons in 2011-12 and 2012-13.

The trial looked at the links between feed, breed and gender on saleable meat yield with the help of geneticist Aimee Charteris, who looked for patterns and insights into on-farm factors influencing saleable meat yield, carcase weight and fatness.

Information was recorded on farm prior to processing, then compared against the individual animals’ carcase weights, fatness levels and saleable meat yields. Results were consistent between the two seasons.

Ewe lambs fatter, but similar in carcase weight and yield

The study found ewe lambs were on average fatter than males of the same age. However, there was no significant difference between carcase weight and saleable meat yield. Ewe lambs should therefore be processed earlier than male lambs, if the processing specifications demand lower fat cover, the trial found.

Researchers found that identifying different sexes – particularly of terminal-sired lambs – and adjusting their feeding regime and timing of processing can improve the bottom line.

“For example, to avoid ewe lambs having a lower saleable meat yield, they could be separated at weaning, condition score monitored and processed earlier, at lower live weights than males.

“In another example, castrating small male lambs at docking and leaving bigger male lambs entire – to be processed pre-autumn – avoids a drop in saleable meat yield during autumn.”

The study also found that single-born lambs were heavier, fatter and had lower saleable meat yields than twin lambs.

“Single born lambs should be processed earlier to achieve better saleable meat yields, although further investigation is needed to determine the optimal age.

“There may also be a need to easily identify single-born lambs, at drafting time,” researchers said.

“The main message I took out of the trial was that farmers tend to treat lambs as lambs.

“This method of management is particularly noticeable in terminal-sired lambs, where all sexes tend to be treated the same.

Mr Ellingham said these differences are notable in autumn in NZ, when lambs reach sexual maturity.

“If we are going to leave male lambs entire, we need to process them by February to optimise their meat characteristics – that is, the dressing out percentage and saleable meat yield. Both are important.

“When it comes to female lambs, you don’t want to be killing them in March or April,” he said.

“Their meat quality characteristics that you are paid for – depending on your processor – drop right off over that period. So process before or after that.”

The study found there were significant differences in carcase weight and fatness and meat yield across the lambs, when fed different feed types, but the results were not consistent over the season.

Across the supply season – October to September – there were considerable decreases in saleable meat yield, particularly through March and April – and across both seasons (see graphs below). The variations were linked to a combination of declining feed quality and lambs reaching sexual maturity. The group concluded that it was financially worthwhile for individual farmers to evaluate their own systems to identify opportunities to address this March/April yield drop off.

Ms Charteris said a more structured feeding trial is planned for this year.

“So we can make sure we identify exactly what the effect is and the size of effect and ensure it absolutely is the feed type that is causing the significant differences.”

Researchers said before on-farm changes can be recommended, more work is needed to understand breed and feed variations. There is also potential to investigate the correlation between dressing out percentage and saleable meat yield.

To download a copy of the project’s final report click on this link: How on-farm factors influence saleable meat yield 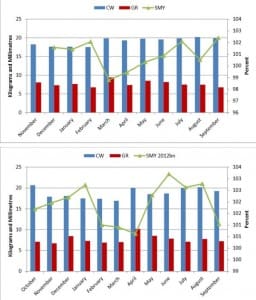